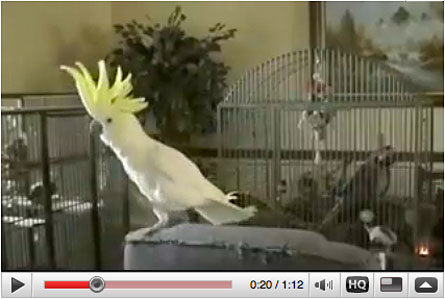 New research shows that Snowball the sulfur-crested cockatoo moves in time to musical beats, an ability long attributed only to people.

View videos of the parrots dancing

The idea for a science experiment can come from an unusual place. After watching a YouTube video of a dancing bird named Snowball, a scientist in California decided to study the ability of animals to keep the beat.

Bird lovers have long claimed that their pets have rhythm. And many videos show dancing birds online. Until now, scientists have suspected that humans were the only animals that could accurately keep rhythm with music.

“Scientists have claimed that this capacity is uniquely human for several decades,” says W. Tecumseh Fitch. He is a psychologist at the University of St. Andrews in Fife, Scotland.

Thanks to Snowball, that scientific opinion is changing. Snowball is a cockatoo, a kind of parrot. And his favorite song is “Everybody,” by the Backstreet Boys. When he hears it, he stomps his feet and sways his body with the tempo, or pace of the music. It’s as though he is a bird member of the boy band.

Aniruddh Patel works at the Neurosciences Institute in San Diego. As a neuroscientist, he studies how the brain and the nervous system contribute to learning, seeing and other mental abilities. After seeing Snowball’s dance moves online, Patel visited the bird rescue facility where the cockatoo has lived for two years. The scientist played “Everybody” for Snowball. He also played versions of the song that were sped up or slowed down. Sometimes, Snowball danced too fast or too slowly. Often, when there was a change in tempo, Snowball adjusted his dancing to match the rhythm. In other experiments, scientists have observed the same abilities in preschool children.

Patel isn’t the only scientist who has studied Snowball’s moves. Adena Schachner at Harvard University also wanted to know more about the dancing bird. So her team played different musical pieces for Snowball and a parrot named Alex, as well for as eight human volunteers. The scientists observed that the birds and the people kept time to the music with about the same accuracy.

Schachner and her team didn’t stop with the birds. Her team also watched thousands of YouTube videos of different animals moving to music. Not all of the animals could dance, however. Only animals that imitate sounds, including 14 parrot species and Asian elephants, accurately moved in time to music.

Patel suspects that the ability to keep time with music is connected in the brain to the ability to imitate sounds. If he’s correct, then animals like songbirds, dolphins, elephants, walruses and seals should also be able to dance.

Researchers don’t know how music came into existence. Some scientists think the origins of music are tied to mental skills like language development. Others wonder if music came about during the Stone Age, roughly 2.5 million years ago to 10,000 years ago, as a way to build social skills. Now scientists know that even newborn babies can recognize rhythm.

The ability to move one’s body in time with music is called entrainment, and scientists have a number of different theories for why people dance. By studying the brains of dancing birds like Snowball, scientists may start to figure out the science of dancing.

tempo: The speed at which music is or ought to be played.

rhythm: The pattern of musical movement through time, or a specific kind of such a pattern, formed by a series of notes differing in length and emphasis.

neuroscience: Any of the sciences that deal with the nervous system.

nervous system: a collection of cells and tissues (a group of cells working together) that regulates the actions and responses of backboned and many backbone-less animals.

psychology: The science that deals with mental processes and behavior.

Snowball, a sulfur-crested cockatoo, bobs his head, sways his body and stomps his feet to a percussive musical tune. Experiments indicate that Snowball is able to synchronize his movements to a musical beat, challenging the longstanding belief that only people can dance in this way.

Alex the African gray parrot takes a cool, head-bobbing approach to moving with the music, whereas Snowball fiercely stomps out the beat to Queen’s “Another One Bites The Dust.”