The first rule for anyone dealing with a black hole is, of course, don’t get too close. But say you do. Then you’re in for quite a trip — a one-way trip — because there is no coming back once you fall into a black hole.

A black hole isn’t actually a hole. If anything, it’s the opposite. A black hole is a place in space containing a lot of stuff packed very closely together. It has accumulated so much mass — and therefore gravity — that nothing can escape it, not even light.

And if light cannot escape a black hole, then neither can you.

As you approach a black hole, its gravitational pull gets stronger. That’s true of anything with gravity, including the Earth and sun.

Before long, you pass a point called the event horizon. Every black hole has one. That’s true whether the black hole has the mass of a single star or as much as the collective mass of millions (and sometimes billions) of stars. An event horizon surrounds each black hole like an imaginary sphere. It acts like a boundary of no return.

What happens next isn’t pretty — but if you go in feet-first, you might be able to watch. Since your feet are closer to the black hole’s center, its gravity pulls stronger on your lower body than on your upper body.

Look down: You will see your feet being drawn away from the rest of your body. As a result, your body gets stretched, like chewing gum. Astronomers refer to this as “spaghettification.” Eventually, your whole body gets stretched into one long human noodle. Then things really start to get interesting.

For instance, at the center of the black hole, everything — including your shredded self — collapses to a single point.

Congratulations: Once there, you really have arrived! You also are on your own. Scientists have no idea what to expect once you get there.

Luckily, you don’t have to fall into a black hole to learn about this cosmic phenomenon. Decades of study from a safe distance have taught scientists quite a lot. Those observations, including startling discoveries made in recent months, continue to add to our understanding of how black holes help shape the universe.

How to build a black hole

The gravitational pull of an object depends on how much stuff it contains. And just as with stars and planets, more stuff — or mass — comes with a greater force of attraction.

Black holes aren’t just massive. They’re dense, too. Density is a measure of how tightly mass is packed into a space. To understand how dense a black hole can be, imagine you could pack your own. Start with a thimble. Fill it with all of your books (you would need to really stuff them in). Add your clothes and any furniture in your room. Next, add everything else in your house. Then throw in your house too. Make sure to squeeze it all down to fit.

Don’t stop there: A black hole with a thimble-sized event horizon contains as much mass as the entire Earth. Stuffing your thimble increases its density, its mass and its gravitational attraction. The same is true with black holes. They pack a huge amount of mass into an incredibly small space.

Imagine a black hole the size of New York City. It would have as much mass and gravity as the sun. That means this New York-sized black hole would be able to hold all eight planets (and every other object in our solar system), just as the sun does.

What the black hole wouldn’t be able to do is gobble up the planets. That sort of idea gives black holes a bad rap, says Ryan Chornock. He is an astronomer at the Harvard-Smithsonian Center for Astrophysics in Cambridge, Mass.

“One popular misconception you see in science fiction is that black holes are kind of cosmic vacuum cleaners, sucking in things that pass by,” Chornock says. “In reality, black holes just sit there unless something extraordinary happens.”

Sometimes, a star will get too close. In May 2010, a telescope in Hawaii picked up a bright flare from a distant galaxy. That blaze peaked a few months later, in July, and then faded away. A team of astronomers, including Chornock, identified this glow as the last blast from a dying star being ripped apart by a black hole. As the remnants of the star fell toward the black hole, they became so heated that they glowed. So even black holes can create brilliant light shows — by eating stars.

“When a star gets pulled in, it gets shredded,” Chornock says. “It doesn’t happen very often. But when it does, it’s hot.”

Most black holes form after a giant star, one at least 10 times as massive as our sun, runs out of fuel and collapses. The star shrinks and shrinks and shrinks until it forms a tiny, dark point. This is known as a stellar-mass black hole. While much smaller than the star that made it, the black hole maintains the same mass and gravity.

Our galaxy probably contains about 100 million of these black holes. Astronomers estimate a new one forms every second. (Note that small- and medium-sized stars, such as the sun, cannot form black holes. When they run out of fuel, they become small, planet-sized objects called white dwarfs.)

Again, nothing can escape a black hole — not visible light, X-rays, infrared light, microwaves or any other form of radiation. That makes black holes invisible. So astronomers must “observe” black holes indirectly. They do this by studying how black holes affect their surroundings.

For example, black holes often form powerful, bright jets of gas and radiation visible to telescopes. As telescopes have grown larger and more powerful, they have enhanced our understanding of black holes.

“We seem to be finding bigger and more powerful black holes than we would have expected, and that’s quite interesting,” says Julie Hlavacek-Larrondo. She is an astronomer at Stanford University in Palo Alto, Calif.

“We know big black holes have these incredibly powerful [jets] that can easily extend beyond the size of the galaxy,” says Hlavacek-Larrondo. “How can something so small create an outflow that’s so much bigger?”

The size of the jet can be used to estimate the size of the black hole. That has led to some surprising findings. In December 2012, for instance, Hlavacek-Larrondo and other astronomers reported that some black holes are so big they deserve a new name: ultramassive.

These black holes probably contain anywhere between 10 billion and 40 billion times more mass than does our sun.

Even five years ago, astronomers knew of no black holes with a mass above 10 billion times that of our sun, says Jonelle Walsh. She’s an astronomer at the University of Texas at Austin.

With so much mass, the superstrong gravity of an ultramassive black hole can hold together entire clusters, or groups, of galaxies.

Mysteries of the massive

“How do you create these big black holes?” asks Hlavacek-Larrondo. They are so large that they must have slowly gained mass after first forming billions of years ago. Scientists are now starting to explore how black holes have been forming since the Big Bang.

How to build a big black hole isn’t the only mystery. Supermassive black holes are connected, through gravity, to hundreds of billions of stars. Figuring out the link between a black hole and the stars it anchors is a dilemma. Which came first is a bit like the chicken and the egg question.

“We’re still not sure if the supermassive black hole came first — and then gathered galaxies into a linked cluster, admits Hlavacek-Larrondo. Maybe the clustering came first.

Last year brought yet another discovery that deepens the mystery about black holes. Walsh, the Texas astronomer, and her colleagues used the Hubble Space Telescope to study a galaxy called NGC 1277. This galaxy lies more than 200 million light-years away. (A light-year is the distance light travels in one year.) Even though NGC 1277 is only about one-fourth the size of the Milky Way, Walsh and her colleagues reported in November that the black hole at its center is one of the biggest ever measured. They estimate it is about 4,000 times more massive than our galaxy’s Sagittarius A*.

In other words, “the black hole there is too big for the galaxy it resides in,” Walsh says. Black holes and galaxies are usually believed to grow — and stop growing — together. This new discovery suggests either this black hole just kept growing, by feeding on nearby stars and other black holes, or somehow was oversized from the very start.

Walsh says she wants to know if other galaxies have a similar arrangement — or even the opposite, with a small black hole at the center of a large galaxy.

“We can try to infer how the growth of one affects the other,” Walsh says. But how that happens, she notes, “is not fully understood.”

Black holes are some of the most extreme objects in the universe. Astronomers continue to find and observe more of their extreme members, including the biggest, smallest and strangest black holes out there. Explains Walsh: Those observations can help untangle the complicated relationships black holes have with stars, galaxies and clusters of galaxies. That future research, she explains, “will push us toward understanding how everything [in the universe] works together and forms and grows.”

astronomy The science that deals with space and the physical universe as a whole.

astrophysics The branch of astronomy that uses the laws of physics to understand more about the matter and energy of stars and other celestial objects.

Big Bang The cosmic expansion that marked the origin of the universe 13.8 billion years ago, according to current theory.

black hole A region in space with a lot of mass packed into a small volume. The gravity is so strong that not even light can escape.

galaxy A system of millions or billions of stars, together with gas and dust, held together by gravitational attraction. Most galaxies are believed to have a black hole at their center.

galaxy cluster A group of galaxies held together by gravitational attraction.

gravity The force that attracts any body with mass, or bulk, toward any other body with mass. The more mass there is, the more gravity there is.

light-year A unit of measurement equal to the distance light can travel in a year. It equals about 9.5 trillion kilometers (6 trillion miles).

radiation The emission of energy as electromagnetic waves or as moving subatomic particles.

supernova The explosion of a star. 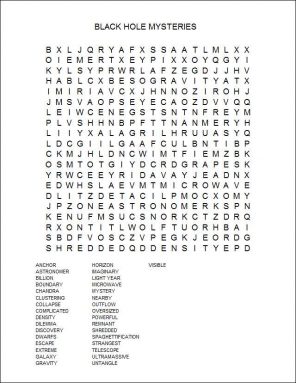