Most animals, plants and other organisms possess a broad range of traits, or features. For instance, within a species, some individuals might be bigger. Some might be faster or better camouflaged. Others might have genes that allow them to resist disease, better digest some foods or even learn new tasks more quickly.

Many traits help an organism survive and reproduce. These traits often can be inherited. That means an organism can pass them down to its offspring. Over multiple generations, useful inherited traits tend to become common in a population.

Once-useful traits, however, can become worthless. Some can even become detrimental. That can happen if a species moves to a new environment — or if its environment changes. Now, a different trait, even one that might have been rare, can become more common. In this way, populations adapt to their environments. Biologists refer to this as natural selection.

Until recently, scientists thought such evolution required hundreds of years, if not thousands. That glacial timetable seemed to reflect the pace at which the planet itself evolved. Consider mountains: They might take a million years to rise up. And entire continents might take tens of millions of years to shift position from, say, the tropics to the South Pole. Even relatively small islands might take millennia to emerge from the sea. As our planet has evolved, life has adapted along with it.

These major transformations to our planet still happen. However, people have become Earth’s dominant force of change. One way we do that is by shifting species across the globe, both on purpose and by accident. Corn, potatoes, tomatoes and peppers are all New World crops. Today, farmers grow them worldwide. Meanwhile, we have helped invasive species such as the lionfish, kudzu and fire ant establish themselves in North America. Every day, airplanes, ships, trains and trucks carry hitchhiking animals and plants to new destinations.

Such environmental changes pressure species to adapt ever faster. Not all will succeed. Any that fail will go extinct. But many are coping. And scientists have begun observing some of these evolutionary speed demons in the very act of adapting.

When it comes to survival, animals have two immediate concerns. One is finding their next meal. The other is avoiding becoming someone else’s meal. What happens when a new predator comes to town? That’s what Jacco van Rijssel wanted to know.

Van Rijssel is an evolutionary ecologist at Leiden University in the Netherlands. He studies fish called cichlids (SIH klidz) that live in Lake Victoria, in East Africa. These varied, colorful fish fascinate biologists. Researchers have discovered that the lake’s more than 500 types of cichlids all evolved from just a few species. And due to rapid and extreme changes in their environment, these fish continue to evolve at a fast clip.

For the cichlids, the biggest change arrived in the form of a toothy predator — the Nile perch. The Ugandan government introduced the tasty fish in the 1950s to boost the lake’s fisheries. Within 30 years, Lake Victoria’s perch population had boomed. These perch gobbled up cichlids left and right.

To track the impact of this change, a team of researchers began sampling the lake’s cichlids every three years. Between 1978 and 2006, they collected specimens of the fish. The experts preserved the cichlids in alcohol at the Naturalis Biodiversity Center in Leiden. By the late 1980s, just 10 years into the study, few cichlids remained in Lake Victoria.

Recently, van Rijssel went back and analyzed the preserved fish stored at the Leiden biodiversity center. He hoped to discover how some species of cichlid had survived the introduction of the Nile perch. One feature immediately stood out: The body shape of some survivor cichlids had morphed. Over time, their tails grew larger and heads smaller. This alteration allowed these cichlids to swim faster.

Van Rijssel suspected he might find such a change. Still, the benefit of the shape shifting startled him. The fish could now quickly dart beyond the snap of a perch’s hungry jaws. Also startling was the price paid by the species that held on to their old shape. Those fish went extinct.

Interestingly, the cichlids didn’t permanently retain their streamlined adaptation, van Rijssel found. As more people fished for perch, numbers of these predators shrank. Once again the cichlids responded. This time they gradually morphed back into their old shape. Van Rijssel suspects this shift back to a larger head offered the cichlids a benefit. Big heads provide more room for bigger muscles (to crush bigger prey) and bigger gills (to consume more oxygen). Once the cichlids didn’t worry so much about fleeing perch, they adapted to other survival needs.

In the quest to survive, some of the threats driving natural selection — such as predators — are obvious.

Take crickets: Nothing says summer like a nighttime symphony of these insects. Male crickets rub their wings together. This creates chirpy songs that attract females. That’s pretty much how male crickets spend their time: When active, they call out from their hiding places to potential mates.

When Marlene Zuk spotted crickets running around in the open during a visit to the Big Island of Hawaii in 1991, she wondered why. An evolutionary biologist at the University of Minnesota, she knew parasites could change a host’s behavior. (The host is the organism on which a parasite depends for survival.) Zuk wondered if some parasite had infested these crickets. So she collected a few.

As Zuk dissected the first cricket, out spilled several fat, white larvae (LAR vee). To her surprise, these weren’t parasites. They were parasitoids (PAIR uh sih toydz). Such organisms (usually insects) lay their eggs on or in other living organisms. When the larvae hatch, they begin eating their host from the inside out. Ultimately, the parasitoids kill their host. That is something parasites don’t usually do.

Curious, Zuk collected more crickets. Then she patiently waited for the mystery larvae to emerge. That allowed her to identify the parasitoid. It was a fly called Ormia ochracea. This species listens for cricket chirps to find a nourishing host for its offspring. Populations of the fly had invaded three Hawaiian islands — Hawaii, Kauai and Oahu. Like any invasive species, the flies had arrived from elsewhere — in this case, North America.

In 2001, Zuk returned to the Hawaiian islands, this time to Kauai. She found almost no crickets. The flies had devastated that island’s cricket population. So when she visited Kauai again two years later, Zuk half-expected to find that the crickets had gone extinct. Instead, she saw them everywhere. To her surprise, none made a chirp.

Zuk scooped up some of the silent male crickets and brought them back to her lab. There, she closely studied their wings. Those on nine out of every 10 crickets had a strange shape, she found: They were flat. These wings had lost the file and scraper structures that males rub together to chirp.

After further investigation, Zuk discovered a change, or mutation, to just one gene in the cricket’s DNA. That mutation caused the insect to go quiet. One cricket had developed this accidental mutation. When parasitoid flies couldn’t find this silent male, the cricket survived and mated. At least some of that cricket’s offspring inherited that same flat-wing gene. As the killer flies found and infested more chirping crickets, the silent ones began to thrive. In the span of just a few years, these mute crickets triumphed as the near-sole survivors of their species on Kauai.

Their success appears to have been short-lived. On a recent visit, Zuk found few crickets on Kauai — two, to be exact. It’s possible, she now says, that the island’s crickets still will go extinct. One possible reason: A cricket population might need a certain number of chirping males in order for females to find a mate. (Zuk found that the silent males tended to hang out near other males that retained the ability to chirp. This allowed them to still meet up with females.)

In the meantime, the biologist continues to monitor cricket populations on three Hawaiian islands for more details on how the parasitoid flies drive evolutionary change.

Up from the deep

Even invisible pressures can drive rapid evolution. Human activities, such as burning coal, oil and natural gas, have boosted levels of carbon dioxide in the air. As a greenhouse gas, this carbon dioxide contributes to climate change.

Oceans have absorbed about one-third of the excess carbon dioxide spewed by the burning of fossil fuels. The good news is that has kept more of the gas out of the atmosphere. It also has prevented temperatures from climbing even faster. The bad news is the carbon dioxide harms some sea creatures.

When carbon dioxide dissolves, it reacts with water molecules to create carbonic acid. So adding carbon dioxide to the oceans makes the water more acidic. When the acidity climbs too high, it can break down the shells and skeletons of marine animals. It can also interfere with processes inside their cells.

Melissa Pespeni wondered how well certain marine animals might be adapting to the rising acidity. To find out, this evolutionary biologist, then at Stanford University in Palo Alto, Calif., raised purple sea urchins in her lab. She focused on very young animals, again called larvae.

These urchins live in the cold waters of the Pacific Ocean, off the West Coast of North America. There, the spiky animals munch on leafy algae growing along rocky coasts. Those algae, in turn, depend on currents to bring them cold, nutrient-rich water from the ocean’s depths. The currents bring something else too: more carbon dioxide and acidity.

Both groups of larvae seemed to develop equally well (although those living with more carbon dioxide were a tad smaller). At least to the unaided eye, excess carbon dioxide didn’t seem to interfere with the growth of the urchins or the development of their organs.

When Pespeni looked at the animals’ genes, however, she discovered a big difference. In both groups, the young larvae showed lots of genetic variation. That variation persisted throughout the study for urchins exposed to normal levels of carbon dioxide. However, as the urchins in the more acidic water grew older, certain alleles — different versions of genes — became more common. Genes that regulate aspects of growth and the control of acidity appeared most affected.

Pespeni does not think the higher carbon dioxide levels altered the genes in the urchins. Instead, she thinks the loss of certain alleles reflects the death of larvae that had carried these genes. In other words, the urchins that were not genetically suited to the new, more acidic environment died. Larvae born with the right alleles thrived, despite their water’s high acidity. And it was their alleles that began showing up at unexpected rates in the urchin larvae living in the more acidic ocean water.

These findings provide hope that at least some sea animals might adapt to a more acidic world. Still, Pespeni urges caution. Her study tested only one aspect of the ocean and for only one species. Biologists need to conduct more tests looking at how the urchins respond to other environmental conditions — such as warmer water — in addition to higher acidity, she says. Scientists also need to study the abilities of other marine organisms to adapt to a warmer, more-acidic world.

Just how will animals across the globe adapt to Earth’s rapidly changing conditions? It’s impossible to say. “Evolution isn’t moving toward anything,” observes Zuk — it doesn’t have a goal. Where evolution takes species next depends on how an environment changes and whether affected organisms can evolve (and quickly) to adapt to those changes. 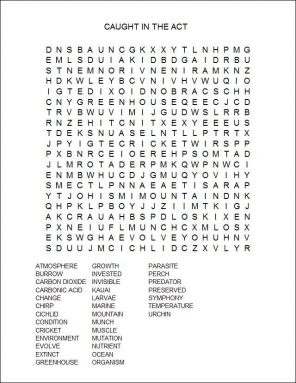