In 1859, a massive burst of energy from the sun slammed into Earth. It caused telegraph wires to explode in sparks, which gave some telegraph operators electric shocks. People could see auroras — the northern lights — as far south as Cuba and Hawaii.

If such a powerful burst, called a solar flare, were to hit our planet today, it could disrupt modern civilization. The energy could zap satellites, fry computer systems and knock out power grids. So when can we expect the next “super flare” to strike?

That’s the question Steven Saar has been trying to answer. He is one of many scientists trying to better understand our sun.

Of all the bodies in the universe, the sun seems one of the most familiar. After all, by the time you turn 20, you’ll have seen it rise and set some 7,300 times. But there’s still a lot that science does not yet know about the star at the center of our solar system. What causes solar flares and can they be predicted? Why is the sun’s atmosphere more than a million degrees hotter than its surface? How does the sun actually work?

Our star is still full of mysteries. And here are three scientists who are working to crack the case.

Saar is an astronomer studying at the Harvard-Smithsonian Center for Astrophysics in Cambridge, Mass., who studies stars. He wanted to know how often the sun produces a super flare like the one in 1859. There was just one problem: it had only happened once in recorded history. That made it mathematically impossible to predict how often it might occur.

To get a larger sample, Saar had to look outside our solar system. “The sun is a star,” he says. “So one can go out and try to find other stars that are as similar to the sun as possible.”

Using data from NASA’s Kepler space telescope, he looked for these “sun twins.” He turned up 84 sun-like stars and observed them for around four years. He wanted to see how often they released bursts of energy at least as powerful as the 1859 flare. Then he combined all of these data to get an average.

The stars he studied were younger and more active than our sun. That meant they had more flares. When he adjusted the results for an older, quieter star, he got his answer. A star like our sun should produce a super flare once every 200 to 480 years. His best guess: probably close to 350 years.

Saar was excited. “Getting an estimate for the sun itself, that was the holy grail, the key question,” he says.

Saar has loved astronomy since he was a child. While he explored other sciences as a student, astronomy was always his favorite. Eventually he decided to become an astronomer. In graduate school, galaxies were a popular subject. Saar wanted to do something different. A mentor suggested he look at sun-like stars. And with that, he was hooked.

“The sun is obviously really important to us,” he says. “It’s actually an area of astronomy that has relevance for our daily life. So it’s interesting and important to understand how the sun works, how it can change over time and what it can do.”

Saar saw that the key to understanding some of the sun’s biggest mysteries might actually be in looking at other stars.

“Although we can study the sun in great detail, it’s only a single example,” he says. “The idea is that if you study a lot of stars that are maybe similar to the sun, you might learn how the sun works.” In this case, it will be “indirectly, by looking at other examples.”

Next, Saar would like to add more stars to his sample. That would let him predict the frequency of super flares more precisely. He also plans to look at his original data again. He wants to remove any other bursts of energy or activity near a star that may have been mistaken for a flare. That might lower the estimate slightly, getting it closer to results announced by Japanese scientists working on the same question. They had predicted a super flare once every 500 to 600 years. “I think we’re homing in on a good number,” Saar says.

At the top of a 10,000-foot mountain on the Hawaiian island of Maui, the world’s most powerful solar telescope is under construction. When completed, the Daniel K. Inouye Solar Telescope will be able to see objects on the sun’s surface as small as 18 miles across.

Solar physicist Thomas Schad is helping design one of the five main tools that will be used in the telescope. He is a scientist with the University of Hawaii’s Institute for Astronomy in Pukalani. His instrument will analyze the makeup of the sun’s light.

Every element reflects light at a different wavelength. By splitting a beam of light into these wavelengths, scientists can learn about the sun’s properties. These include such things as what chemicals it is made of and how hot they are.

This split light is referred to as a spectrum. Studying it doesn’t just tell scientists about how the sun works. It also gives them a close-up look at some of the physics that might also be happening in more distant stars. Because the sun is so close, they can study it in much greater detail.

Schad got interested in solar physics while he was in college. He had taken part in a research program. The scientist who supervised him handed him data on the light spectra from explosions in the sun. Schad was asked to use those data to learn more about the explosions.

“It’s amazing just how much information we can pull out from the sun by analyzing the spectrum,” Schad now observes.

When what you need does not exist

As he began studying the sun, Schad realized that some of the tools he needed did not yet exist. He was excited to build them himself. “That’s how science moves forward. You know what the questions are, and you come up with ways you might answer them.” Plus, he adds, “I’ve always liked tinkering with things.”

The instrument Schad is helping to build for the new solar telescope will analyze infrared light. It is called the Diffraction Limited Near Infrared Spectropolarimeter (SPEK-trow-po-ler-IM-eh-tur) — or DL-NISP, for short. Many of the most important elements in the sun reflect light at infrared wavelengths. When the telescope first sees light in 2019, the DL-NISP will be used to study magnetic fields at the sun’s surface and in its lower atmosphere.

Schad must study the instrument’s design and make sure it has all the parts that it will need to do its job. He sends guidelines to the people producing its lenses and mirrors. Then he orders other special parts. When all of the pieces are completed, he must test each one to make sure they meet the telescope’s strict requirements. Then he will start putting them together.

In all, the telescope will have 21 lenses, 15 mirrors, three cameras and 21 motors. “We basically are building a big robot,” he says.

If you took a stroll on the surface of the sun, the temperature would be a relatively cool 6,000° Celsius (11,000° Fahrenheit). But move up into the sun’s atmosphere and it gets much toastier — around 2 million degrees. Why is the sun’s atmosphere so much hotter than its surface? And where does all that heat come from? These are among the biggest mysteries in solar science.

Some physicists think the heating of the solar atmosphere, or corona, is related to the sun’s magnetism. They think that waves of magnetic energy vibrate. These waves might move energy from the sun’s interior out into the corona, where it would be released as heat. But they’re not sure exactly how that might work.

Patrick Antolin wanted to test this theory. He is a solar physicist at the National Astronomical Observatory of Japan in Tokyo. He also is part of a team that worked with two space-based telescopes.

Japan’s Hinode telescope observed how the sun’s magnetic waves moved from side to side. NASA’s IRIS telescope measured their twisting motion. Combining both sets of data gave the scientists a complete picture of the movement.

With this, they saw the first direct evidence that coronal heating is caused by magnetic resonance. That’s when two magnetic waves vibrate in sync with one another, causing one of the waves to get stronger.

Antolin’s team then used a supercomputer to run a numerical simulation. It showed how this movement created an unusual form of turbulence — a bumpy swirling of gases — not seen on Earth. It also showed how this turbulence released energy into the atmosphere.

Antolin was excited. And part of that was because this finding was such a surprise. When they started the project, his team didn’t think it would work. True, his model predicted magnetic resonance would cause heating. But previous observations didn’t seem to support the theory. Still, the physicist says: “I was unwilling to give up so easily.”

When his group finally put all of the data together for the first time, these scientists were able to show how it worked. They realized magnetic resonance was not acting alone. It was accompanied by that strange turbulence. “The combination of both these mechanisms was producing exactly what was being observed,” he says.

What’s next for his research? Antolin’s team only looked at magnetic resonance in solar prominences (large loops of gas). That’s one type of structure in the sun. Next, they want to see if it also happens in another type of structure called spicules (little jets of gas).

If they can show that their model explains heating in many parts of the sun, it may someday solve the coronal mystery once and for all. And along with research by Saar and Schad, such findings will bring us a little closer to understanding our nearest star — our sun.

This is one in a series on careers in science, technology, engineering and mathematics made possible with generous support from Alcoa Foundation. 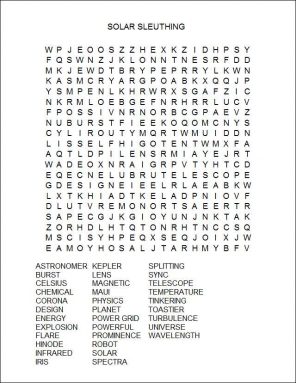