By Emily Conover and Christopher Crockett

For the second time in roughly four months, scientists have glimpsed elusive ripples vibrating through the fabric of space. Scientists announced the new observation of gravitational waves — also known as gravity waves — on June 15. Being able to detect these waves, potentially on a regular basis, opens a new window through which to observe the universe, the scientists said.

Gravity waves were detected using the Advanced Laser Interferometer Gravitational-Wave Observatory, or LIGO. The first detection of such waves was announced on February 11.

Explainer: What are gravitational waves?

“The era of gravitational wave astronomy is upon us,” says Scott Ransom. This astronomer, who is not involved with LIGO, works at the National Radio Astronomy Observatory in Charlottesville, Va. The new finding suggests that the first was not a fluke, nor necessarily rare. All they needed to see such waves was the right equipment. LIGO provided that. This system went into service last fall.

Black holes are regions of space having a gravitational field so intense that no matter or radiation (including light) can escape. Both sets of cosmic quivers detected by LIGO were set in motion by the cataclysmic collisions of black holes. And they were big ones. Black holes can have masses many, many times greater than that of a typical star. And such giant black holes will tend to make truly big ripples in spacetime — ones that may be visible to detectors half-way across the universe.

The latest gravity waves indicate that such merging pairs of black holes — also known as binary black holes — can be quite varied in size. The newly detected black holes were much smaller than the first pair. And this time, scientists concluded, one in the pair also had been spinning like a top.

Gabriela González is a physicist at Louisiana State University in Baton Rouge. She’s also a spokesperson for LIGO. The finding of a second gravity-wave signal is quite important, she says. It means these may not be rare. Also important, she adds, is “that it’s different.” As such, she notes, “It shows that there’s a spectrum of black-hole systems out there.”

Those in the most recent smashup were about eight and 14 times the mass of the sun.

As they spiraled around each other and slammed together, these black holes churned up cosmic undulations. They stretched and squeezed space — something that had been predicted by Einstein’s general theory of relativity.

These waves careened across the universe. On December 26, 2015, they eventually reached LIGO’s twin detectors in Hanford, Wash., and Livingston, La.

Each L-shaped detector sensed the minuscule stretching and squeezing of space across its two 4-kilometer-long arms. As a gravitational wave passed through, one arm lengthened while the other shortened. Laser light bouncing back and forth in the arms served as an ultrasensitive measuring stick. It picked up those subtle length changes.

As the gravitational waves rumbled past Earth in December, they stretched and squeezed the arms by less than a thousandth the width of a proton. “That’s very, very small,” González said. “That’s like changing the distance between Earth and the sun by a fraction of an atomic diameter.” This tiny deviation appeared in both detectors at nearly the same instant. And that was enough to identify — and confirm — the telltale ripples.

Their fusion formed one bloated black hole. Its mass was roughly 21 times that of our sun. During the collision, one sun’s worth of mass was converted into energy. It was carried away by the gravity waves. That’s what several LIGO scientists reported June 15. They were speaking in San Diego at a meeting of the American Astronomical Society.

Compared with the black-hole merger reported in February, this newer one was a relatively minor dustup. These black holes were less than half the size of those in the first merger. (Those earlier ones had been 30 and 35 times the mass of the sun, according to a new estimate). The gravity-wave signal coming from the newly detected collision was smaller. That allowed it initially to hide out within the messy wiggles in the data. (That result from random fluctuations or unwanted signals from the environment.)

There’s little doubt that the latest signal is real, LIGO scientists now  say. A false alarm of this magnitude should occur only once in 200,000 years.

Indeed, says Clifford Will, the new observation is “very, very exciting.” This physicist works at the University of Florida in Gainesville. And he says the new announcement “looks like a very solid discovery.”

David Reitze, too, works at the University of Florida. This physicist also directs the LIGO project. “Gravitational astronomy is real,” he says. “The future,” he predicts,” is going to be full of binary black-hole mergers for LIGO.”

The first detection of gravity waves had stunned scientists. One reason was the surprisingly large masses of the black holes — and the whopping signals their gravity waves left in the data. The new black hole merger is more in line with expectations.

“This is comfort food,” says physicist Emanuele Berti. He works at the University of Mississippi in Oxford and is not involved with LIGO. “If you had asked me before the first detection, I would have bet that this [latest type] would have been the first kind of binary black hole to be observed, not the monster we saw.”

In a new twist, the scientists found that one of the two merging black holes was spinning. It was rotating at a speed at least 20 percent as fast as its maximum possible speed. Using gravitational waves to study how pairs of black holes twirl could help scientists understand how they form.

LIGO is currently offline, as the system undergoes improvements. Those upgrades will allow its detectors to peer even further into space. Scientists expect it to be back up and running this fall, churning out new detections of gravitational waves. “Now we know for sure that we’ll see more in the future,” González says.

And in the future?

While astrophysicists celebrate the second detection of gravity waves, many are looking ahead to figuring out what caused these cosmic quakes.

Black holes colliding in remote galaxies sent the gravity waves our way. But with only two clear detections from LIGO, there are not yet enough data to figure out for sure how these black-hole duos formed.

For now, there are two leading ideas.

One is that two heavyweight stars were born, lived and detonated together. By heavyweights, astronomers mean these stars would each have been more than some 20 times as massive as the sun. Upon their deaths, these stars would have left behind a pair of black holes snuggled up to one another. Eventually, they would spiral toward each other. Their meeting would have created a spectacular collision.

But that’s just one possibility.

Another is that the black holes found each other in the hustle and bustle of a dense star cluster. Within these crowded communities, stars and black holes gravitationally shove each other around. “My graduate student calls it a black-hole mosh pit,” says Frederic Rasio. He’s an astrophysicist at Northwestern University in Evanston, Ill. He  spoke June 15 at the American Astronomical Society meeting.

Rasio and his colleagues developed computer models to simulate how residents of these clusters might interact. Black holes would settle into the center of their cluster. Some would get caught in another’s gravitational hug. Continued run-ins with other wandering black holes would at some point fling these pairings from the cluster. Eventually, the couple would be left to soar across the galaxy and eventually merge into a single black hole.

Explainer: What is a computer model?

There’s no way to tell if the two black hole pairs found by LIGO formed as sibling stars or cluster cousins. But as more gravity waves show up, there are a couple of tests that could be done.

Measuring the spins of the black holes could distinguish between the different formation scenarios, says Rasio. Black holes from sars that had paired up previously will spin in the same direction. Those that hooked up in a star cluster are more likely to be spinning in random directions. (While LIGO researchers report that one of the black holes in the latest detection was twirling around, they can’t tell which one it was or which way its spin axis was pointing.)

Another test requires finding collisions over a range of distances from Earth. Because it takes time for gravity waves to reach us, more distant impacts happened earlier in cosmic history. If astronomers notice an uptick in collisions happening around the same time that star formation peaked in the early universe, then pairings of massive star are the more likely culprit. That’s the conclusion of Vicky Kalogera, another Northwestern astrophysicist.

“I think this has great potential to tell us how binary black holes formed,” she says. “But we need a larger sample.”

With improved detectors, researchers could eventually listen in on the entire observable universe. They might be able to hear all of cosmic history back to the first wave of star formation. “Big black holes come from big stars,” says Jonah Kanner. He’s an astrophysicist at the California Institute of Technology in Pasadena. Scientists suspect that the first stars could have been hundreds of times more massive than our sun. If LIGO had 10 times its current sensitivity, Kanner says, “we could learn about the first generation of stars. That’s exciting.”

Such a leap would require better tools than exist today. One possibility: a souped-up LIGO with arms that are 10 times longer than the current model now has, says Kanner. 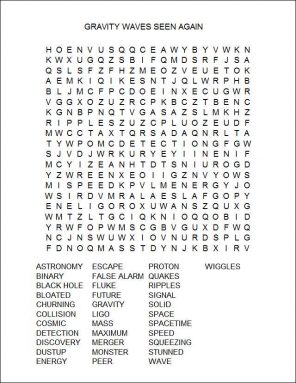