Scientists have been wondering, in recent years, whether dinosaurs were cold-blooded, like today’s reptiles, or warm-blooded like mammals. A new study concludes they were neither. Their bodies’ energy-burning furnaces left them smack-dab in the middle — what you might describe as lukewarm-blooded.

Animals convert their food into energy — and body heat — through a process known as metabolism. The new study compared fuel (food) use and growth rates of modern animals against what is known about those features in dinosaurs. And dinos, at least in terms of metabolism, likely resembled great white sharks, scientists report in the June 13 Science.

The findings offer new clues about how dinos lived. It also reboots a longstanding debate on how warm-blooded they are. Indeed, “This paper will make us go back to the drawing board,” says Martin Sander. A paleobiologist, he works at the University of Bonn in Germany.

For years, paleontologists assumed dinosaurs best resembled modern reptiles and other cold-blooded creatures. That would make dinos slow-growing, low-energy sluggards. They would have had to bask in sunlight for heat. And they wouldn’t have needed much food. “When I was a kid, dinosaurs were just scaled-up, tail-dragging reptilian brutes,” recalls Gregory Erickson. Or at least that’s how they were portrayed. A paleobiologist, Erickson works at Florida State University in Tallahassee.

But in the 1960s, the field of dino metabolism took a U-turn, he says. That’s when researchers found similarities between dinosaurs and modern birds. Over the next few decades, most paleontologists came to think of dinosaurs as warm-blooded. That would make dinos creatures that grow quickly, use lots of energy and regulate their body heat internally. Such an interpretation inspired popular depictions of the ancient reptiles, such as the speedy beasts in Jurassic Park.

Hot-blooded or Cold-blood? Or in between? 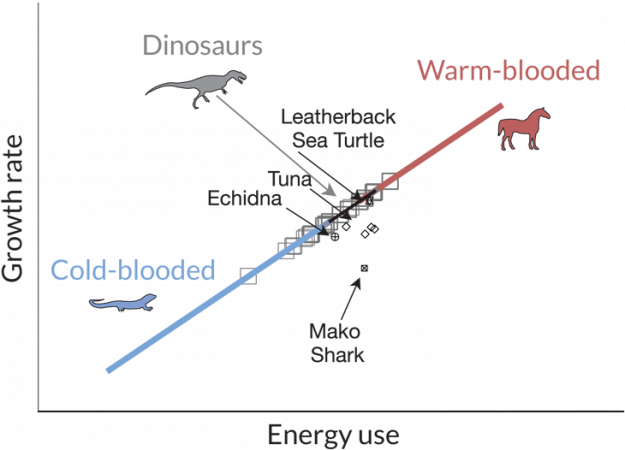 Scientists plotted the growth rates and energy use of 353 modern animals and 21 dinosaurs. Those suggest dinos were more like tuna and some sea turtles than cold-blooded reptiles (see blue end) or warm-blooded mammals (red end of spectrum).

But trying to shoehorn dinosaurs into the warm- or cold-blooded category might be too simplistic, says John Grady. A paleoecologist at the University of New Mexico in Albuquerque, he studies ancient ecosystems.

Previous work had hinted that dinos might not sort cleanly into either the warm- or cold-blooded group. So Grady and colleagues designed a massive study. It would attempt to pinpoint where those ancient beasts might have fit on the spectrum of cold- to warm-blooded life.

His team analyzed the growth rates and the use of energy supplied from food — or metabolism — for 353 modern animal species. These ran from slow-growing, low-metabolism crocodiles to rapidly-growing, high-metabolism ostriches. Then the researchers used data from careful analyses of dinosaur bones performed by other paleontologists. Those data described the growth rates of 21 dinosaurs. These included ferocious meat eaters, such as Tyrannosaurus, and lumbering leaf grazers, such as Apatosaurus.

Grady and his team couldn’t compute the metabolism for creatures that went extinct at least 65 million years ago. They could, however, estimate it from those data on living animals. When Grady plotted the dinos’ growth rates and metabolisms, he found a clear link. “If you double your energy intake,” he says, “you double your growth rate.”

And his team found that the metabolism of all 21 dinos fell right between cold-blooded animals and warm-blooded ones. “I was a little surprised,” Grady notes. “If they’re not like reptiles and they’re not like mammals, then what the heck are they?”

In fact, the dinos did match up with a few living animals — but not the ones he had expected. T. rex and other dinosaurs appear to have had a metabolism similar to that in great white sharks, tuna and leatherback sea turtles, Grady now reports. These animals eat more than do typical cold-blooded fish and reptiles. But they don’t tightly hold a set body temperature like warm-blooded birds and mammals.

Understanding dinosaurs’ metabolic quirks could offer new clues into other debated aspects of their lives, such as how they hunted and why they grew so large, Grady says.

The results might be tough for some people to swallow, says Luis Chiappe. He’s a paleontologist at the Natural History Museum of Los Angeles County in California. “Dinosaurs and tuna are so different,” he says. “It’s hard to envision comparing them.” But he agrees with the authors’ conclusions that dinosaurs occupied a happy medium between cold- and warm-blooded. “It’s going to ignite more research and open people’s minds,” he predicts.

Apatosaurus    A dinosaur whose name means deceptive lizard. It has a long neck and thick, whip-like tail. Formerly known as a brontosaurus, it lived during the Jurassic period, about 150 million years ago. In adulthood, this plant-eater would have weighed some 16 metric tons and had an average length of perhaps 23 meters (75 feet). That would have made it one of the largest animals to ever roam the Earth.

cold-blooded      Adjective for an animal whose body temperature varies with that of its environment.

dinosaur  A term that means terrible lizard. These ancient reptiles lived from about 250 million years ago to roughly 65 million years ago. All descended from egg-laying reptiles known as archosaurs. Their descendants eventually split into two lines. They are distinguished by their hips. The lizard-hipped line became saurichians, such as two-footed theropods like T. rex and the lumbering four-footed Apatosaurus (once known as brontosaurus). A second line of so-called bird-hipped, or ornithischian dinosaurs, led to a widely differing group of animals that included the stegosaurs and duckbilled dinosaurs.

Jurassic   Lasting from about 200 million to 145.5 million years ago, it’s the middle period of the Mesozoic Era. This was a time when dinosaurs were the dominant form of life on land.

mammal   A warm-blooded animal distinguished by the possession of hair or fur, the secretion of milk by females for feeding the young, and (typically) the bearing of live young.

metabolism   The set of life-sustaining chemical reactions that take place inside cells. These reactions enable organisms to grow, reproduce, move and otherwise respond to their environments.

paleobiology    The study of organisms that lived in ancient times — especially geologically ancient periods, such as the dinosaur era.

paleoecology    The study of ecosystems — communities of different species that lived in a particular, ancient environment.

paleontology    The branch of science concerned with ancient, fossilized animals and plants. A scientist who specializes in studying fossils, the remains of ancient organisms, is known as a paleontologist.

Tyrannosaurus rex    A top-predator dinosaur that roamed Earth during the late Cretaceous period. Adults could be 12 meters (40 feet) long.

warm-blooded     Adjective for animals (chiefly mammals and birds) that maintain a constant body temperature, typically above that of their surroundings.