A January 2016 email caught me off guard. Peter Saulson, a physicist at Syracuse University in New York, was sharing a secret. In short order, he said, data would be formally published showing that gravity waves had finally been detected.

Such rumbles emanate from the most violent events in the universe. And in September 2015, two gravity-wave observatories — or detectors — had picked up the tremors. The waves had been unleashed around 1.3 billion years ago by the ferocious encounter of two massive black holes as they merged in a fateful embrace. I had been hoping for such news ever since I published Einstein’s Unfinished Symphony, 16 years ago. My book described astronomy’s most cutting-edge startup: gravity-wave astronomy.

In November 1915, Einstein had unveiled a new way of looking at the workings of gravity throughout the universe. The mathematics underlying that new view of gravity is known as general relativity. The next year, Einstein realized that this new theory also predicted the existence of gravitational waves — now commonly called gravity waves.

Explainer: What are gravitational waves?

But getting a working detector to find them would take decades of blood, sweat and frustration. Now, almost exactly 100 years after Einstein’s first paper on gravity waves, success has emerged. It was as if, Saulson mused, “those black holes were waiting for that moment.”

What Einstein had predicted

The movement of electric charges up and down an antenna create radio waves, a type of electromagnetic radiation.  In much the same way, Einstein reasoned, waves of gravitational radiation must emerge when masses move about. But these waves would not travel through space the way light does, he noted in papers published in 1916 and 1918. These waves instead would ripple as quakes in the very framework of space and time — or spacetime.

Alternately stretching and squeezing space, the wave at the site of the  clashing   black holes would have stretched a 1.8-meter (6-foot) man to 3.7 meters. Within a millisecond, it would have squeezed him down to 0.9 meter (3 feet), before stretching him out once again.

Einstein never imagined such outrageous sources for his waves. Back in the 1910s, the universe seemed relatively quiet. So Einstein pictured these waves rippling out from two stars, say, as they simply orbited one another. He and others knew the spacetime ripples from such events would be feeble. Certainly, they would be too weak to bother looking for.

Many scientists even wondered if such waves existed.

The two sides argued back and forth about this for decades. Until the late 1950s, anyway. Then, a young Joseph Weber at the University of Maryland in College Park decided it was time to settle the question. He’d build a gravity-wave detector.

How to catch a wave

For his device, Weber started with a large cylinder of aluminum. The solid bar was roughly the size of a home’s 50-gallon hot-water tank. He surrounded this with sensors, figuring that a passing wave would cause the bar to resonate like a bell. The sensors would convert that shaking into electrical signals that would be recorded on a paper chart. By using two detectors separated by hundreds of kilometers, scientists could identify local noises (because they would show up on only one detector). Any such local effects on the aluminum bar would be ignored.

By 1969, Weber grandly proclaimed at a science meeting that he had simultaneously recorded a signal on two bars. One was on his Maryland campus. The other detector was some 1,125 kilometers (700 miles) away at Argonne National Laboratory, west of Chicago.

Scientists at the meeting greeted his announcement with applause. Newspapers heralded it as perhaps the most important physics achievement in a half-century. The next year, Weber declared that his signals came from the center of the Milky Way galaxy. Perhaps they came from some supernova going off, he said, or from neutron stars (which had just recently been discovered).  Very quickly, other physics groups rushed to build their own detectors.

But they detected no waves. None at all.

Still, the various teams didn’t give up. By the 1980s, groups in various countries created even bigger bar detectors. Scientists also tweaked their designs. Their hope was that these would be more sensitive.

Still, no waves showed up.

Until his death in 2000, Weber insisted his detectors had recorded gravity waves. Today, physicists suspect Weber’s system merely picked up some natural noises coming from within his bars.

But even as Weber began work on his bars, a totally new technique for detecting gravity waves was being imagined. This method is known as laser interferometry (IN-tur-feh-ROM-eh-tree). In 1962, two Soviet scientists, Mikhail Gertsenshtein and V. I. Pustovoit, first described a way to use it to detect gravity waves. But no one outside Russia was aware of it. Weber, too, briefly thought of the technique. Then, in 1966, Rainer Weiss at the Massachusetts Institute of Technology, in Cambridge, also independently came up with the scheme.

Weiss, who conducted lab experiments on gravity, was at one point asked to teach a course on general relativity. “I couldn’t admit that I didn’t know it,” he recalled. “I was just one exercise ahead of my students.” As part of the course he created, Weiss asked students to imagine how the distance between three massive objects, arranged to form the letter L (one at the corner, the others at each end), would change as a gravity wave passed by. Weiss knew that a gravity wave compresses space in one direction (say, north/south), while it expands it in the other (east/west). A millisecond later, as the wave passed by, the effect would reverse.

While thinking about the problem, Weiss realized it would be a good experiment. He could continually bounce laser beams between the masses. Then he’d make the beams eventually recombine (or optically “interfere” with one another). This should measure any jiggles in the masses if a gravity wave passed by. In other words, it would serve as a gravity-wave detector!

And it had one great advantage over the bars. The bars could respond to only one frequency of spacetime quaking. This laser interferometer, by contrast, could register a range of frequencies. And that would increase the chance that it would notice a passing wave.

By 1972, Weiss had written a landmark report identifying all the fundamental sources of noise that could mask a signal in such a setup. His paper is still consulted today by gravity-wave researchers. From then on, Weiss spent much of his career building a laser-based gravity-wave detector — and figuring out how to keep noise from getting in the way of its recognizing a true signal.

By the 1980s, Weiss joined forces with one of the world’s top experts on gravity waves: Kip Thorne at the California Institute of Technology in Pasadena. Scottish physicist Ronald Drever, then at Caltech, also was part of the team.  Together they began to plan for the construction of two, giant detectors.

In order to detect a wave, they knew the laser’s light path in each “arm” of the L had to be kilometers long. The longer the arm, the more sensitive the detector. (By the time that newly discovered gravity wave hit Earth, it jiggled the masses by less than the width of an atomic particle!)

The system came to be named LIGO, for Laser Interferometer Gravitational-wave Observatory. The National Science Foundation proposed funding it. But when many scientists heard about its staggering cost (it finally rose to nearly $300 million), they complained it was too much to risk on a gamble — an as-yet unproven technology.

Work to build the first LIGO detectors began in 1994. One is in Livingston, La., the other 3,060 kilometers (1,900 miles) northwest of there in Hanford, Wash. Both were up and running within seven years. Each detector sends its laser beams down a path 4 kilometers long.

Over the next few years, scientists tested and refined the system. What they learned let them install new and improved hardware between 2010 and 2015. This “advanced” LIGO started up last fall. And almost as soon as it began operating, bingo! It found a gravity wave.

Elsewhere around the globe, other detectors are joining LIGO’s quest. For instance, a European team has been operating a LIGO-like detector, known as VIRGO, outside Pisa, Italy. A smaller interferometer, GEO600, operates in Germany.

LIGO’s finding of ripples from the merging of those two distant black holes is like Galileo’s first peek at the heavens through his telescope in 1609. Simply put, each allowed the world to witness the birth of a new astronomy.

Galileo’s spyglass uncovered everything from moons orbiting Jupiter to jagged mountains and craters on the moon. These simply amazed 17 th century eyes. Now, gravity-wave astronomy is poised to expand the vision of 21 st century explorers. Electromagnetic waves — be they visible light, radio, infrared or X-rays — are released by individual atoms and electrons. Such radiation reveals information about a distant celestial object — such as how hot or old it is, what it looks like and what it is made of.

Gravity waves share similarly useful — but much different — information. They will tell astronomers how massive objects move, twirl and collide throughout the universe. That’s especially helpful for objects too small to be seen directly, such as neutron stars and stellar black holes.

“We’ve now embarked on an era of exploring phenomena in the universe that are made from warped spacetime,” says Caltech’s Thorne. “I like to call it the warped side of the universe.”

After more than four long and turbulent decades, Weiss, now 83, has at last seen his experimental dream come true. Did he ever despair? “No,” he says. Whatever the outcome had turned out to be, “The problems were interesting, you enjoyed the people you were working with, and it was fun to do!”

The first signal picked up by LIGO was a very fast crescendo. It lasted less than a second. When converted to audio, the wave started as a deep bass and headed toward the piano’s middle C. With that signal, LIGO scientists are beginning a new journey, now able to listen for the myriad events that await detection.

One day, this new seismograph for space tremors may be able to pick up the remnant rumble of the first nanosecond of creation. Those gravity waves would trace back to the awesome spacetime jolt of the Big Bang itself. Indeed, that now suggests, Einstein’s symphony may never be finished.

Marcia Bartusiak is a professor of science writing at MIT and the author of six books on astrophysics and the history of astronomy. They include Einstein’s Unfinished Symphony: Listening to the Sounds of Space-Time. (Joseph Henry Press, December 15, 2000, 266 pp.) 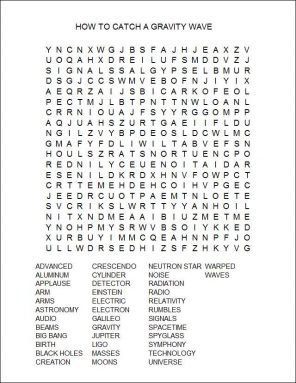