A mystery emerged in Britain during the 1800s. An Industrial Revolution had just taken hold. Busy factories started to darken the skies with smoke from burning wood and coal. The sooty pollution blackened tree trunks. In short order, Victorian scientists took note of a change, too, among peppered moths (Biston betularia). A new, all-black form emerged. It came to be called B. betularia carbonaria, or the “charcoal” version. The older form became typica, or the typical form.

Birds had been able to easily spot the old-style, lightly colored peppered moths as they settled onto soot-blackened tree trunks. Their new dark cousins instead blended in. The result: those carbonaria were less likely to be eaten.

Not surprisingly, numbers of light-colored moths started to fall as their dark cousins increased. By 1970, in some polluted regions nearly 99 percent of peppered moths were now black.

In the late 20th century, things began to change. Laws to control pollution phased in. Companies could no longer throw as much sooty pollution into the air. Before long, birds could easily spy the black moths again. Now the carbonaria moths have become rare and typica moths dominate once more.

Pollution didn’t make the moths black. It just gave a cloaking advantage to any moths that carried the genetic change that turned their wings black. And when the pollution disappeared, so did the dark moths’ advantage.

Still, scientists were puzzled as to how the black moths first came into being. Until now, that is. Researchers in England have traced the difference between a typica and carbonaria moth to a genetic tweak. It occurs in the gene known as cortex.

The scientists reported their finding June 1 in Nature.

An example of quick-change evolution

Genes hold the instructions that tell cells what to do. Over time, some genes may change, often for no apparent reason. Such changes are known as mutations. This study “begins to unravel exactly what the original mutation was” that produced the black moths, says Paul Brakefield. He is an evolutionary biologist at the University of Cambridge in England. The finding, he says, “adds a new and exciting element to the story.”

Wing-color changes in peppered moths are a common example of what scientists refer to as natural selection. In it, organisms develop random mutations. Some of the gene changes will leave individuals better suited — or adapted — to their environment. These individuals will tend to survive more often. And as they do, they’ll pass on the helpful mutation to their offspring.

Eventually, most surviving individuals will carry that altered gene. And if this happens to enough individuals, they can constitute a new species. This is evolution.

Another example of adaptation and natural selection is butterflies that copied, or mimicked, the color patterns of others. Some butterflies are toxic to birds. Birds have learned to recognize those butterflies’ wing patterns and avoid them. Non-toxic butterflies may develop some genetic tweaks that make their wings look like those of the toxic butterflies. Birds avoid the fakes. This lets the copycats increase in number.

Details of the gene changes behind the peppered-moth and butterfly adaptations had eluded scientists for decades. Then, in 2011, researchers tracked the traits to a region of genes that exists in both the moths and butterflies. Still, which precise gene or genes behind the changes remained a mystery.

In peppered moths, the region of interest included about 400,000 DNA bases. Bases are information-carrying chemical units that make up DNA. The region in these insects hosted 13 separate genes and two microRNAs. (MicroRNAs are short pieces of RNA that do not carry the blueprint for making proteins. They do, however, help control how much of certain proteins a cell will make.)

Screening for the gene change

“There aren’t really any genes that scream out to you, saying ‘I’m involved in wing patterning,’” observes Ilik Saccheri. He is an evolutionary geneticist at the University of Liverpool in England. He also led the peppered-moth study.

Saccheri and his team compared that long DNA region in one black moth and three typical moths. The researchers found 87 places where the black moth differed from the light-colored ones. Most changes were in single DNA bases. Such genetic variants are known as SNPs. (That acronym stands for single nucleotide polymorphisms.) Other changes were additions or deletions of some DNA bases.

One difference was an unexpected 21,925-base-long stretch of DNA. It had somehow become inserted into the region. This big chunk of DNA contained multiple copies of a transposable element . (This is also known as a jumping gene.) Like a virus, these pieces of DNA copy and insert themselves into a host’s DNA.

The team examined the DNA of hundreds more typica moths. If a light-colored moth had one of the changes, this meant the change wasn’t responsible for its black winged cousin. One by one, the scientists ruled out mutations that might lead to black wings. In the end, they had a single candidate. It was the large transposable element that had landed in the cortex gene.

But this jumping gene didn’t land in the DNA that provides the blueprint for making some protein. Instead it landed in an intron. This is a stretch of DNA that gets chopped out after the gene is copied into RNA — and before a protein is made.

To be sure the jumping gene was responsible for the black wings seen during the Industrial Revolution, Saccheri and his coworkers figured out how old the mutation was. The researchers used historical measurements of how common the black wing was throughout history. With that, they calculated that the jumping gene first landed in the cortex intron in about 1819. That timing gave the mutation about 20 to 30 moth generations to spread through the population before people first reported sightings of the black moths in 1848.

Saccheri and his colleagues found this transposable element in 105 of 110 wild-caught carbonaria moths. It was in none of the 283 typica moths tested. The other five moths, they now conclude, are black due to some other, unknown, genetic variation.

A second study in the same issue of Nature focused on Heliconius butterflies. These colorful beauties flit throughout the Americas. And like the peppered moths, they have been models for evolution since the 1800s. Nicola Nadeau led a group of researchers that set out to learn what controls wing colors in these butterflies.

Nadeau is an evolutionary geneticist at the University of Sheffield in England. Her team was looking for genetic variants associated with the presence — or absence — of yellow bands on the wings. That coloring is important because that yellow band helps some yummy species of butterflies mimic vile-tasting ones. Pretending to be the bad-tasting butterfly can help the yummy one become a predator’s lunch.

Nadeau’s team combed through more than 1 million DNA bases in each of five Heliconius species. Among them was H. erato favorinus. The scientists found 108 SNPs in every member of this species that had a yellow band on its hind wings. Most of those SNPs were in introns of the cortex gene or outside of that gene. Butterflies without the yellow band did not have those SNPs.

Other DNA changes around the cortex gene were found that lead to yellow bars on the wings of other Heliconius species as well. That suggests evolution acted multiple times on the cortex gene to stripe the bugs’ wings.

Looking for proof of what  ‘jumping genes’ do

The finding that the same gene influences wing patterns in butterflies and moths shows that some genes may be hot spots of natural selection, says Robert Reed. He is an evolutionary biologist at Cornell University in Ithaca, N.Y.

None of the gene differences in the butterflies or peppered moths changed the cortex gene itself. That means it is possible that the jumping gene and SNPs aren’t doing anything to the gene. The changes could be merely controlling a different gene. But the evidence that cortex really is the gene upon which natural selection has acted is strong, says Reed. “I’d be surprised if they were wrong.”

Still, it’s not obvious how the cortex gene would change wing patterns, says Saccheri. He notes that both of the research teams are “equally puzzled about how it is doing what it appears to be doing.”

Moth and butterfly wings are covered with colorful scales. The teams have evidence that the cortex gene helps determine when certain wing scales grow. And in butterflies and moths, the timing of wing-scale development affects their colors, says Reed. “You see colors popping up almost like a paint-by-numbers.”

Yellow, white and red scales develop first. Black scales come later. Cortex is known to also be involved in cell growth. So adjusting levels of the protein it makes may speed up wing-scale growth. And that may cause the scales to become colored. Or it may slow their growth, allowing them to turn black, the researchers speculate.

SNPs, of course,  can alter genes can affect coloration in other organisms, including people.

But the big take-home message in all of this work, the scientists say, is how a simple change in a single gene can make a difference in the look — and sometimes survival — of a species as conditions change. 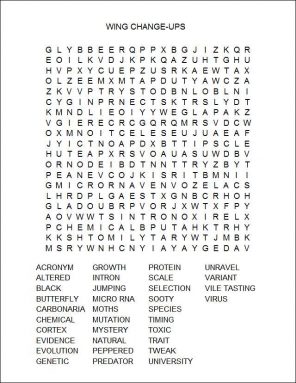