This year marks the 100th anniversary of the sinking of the Titanic, reminding us once again of the deadly threat icebergs can pose to life.

Still, the bad reputation icebergs sometimes have isn’t entirely deserved — even if the scientists who study these floating islands of ice are the first to admit just how risky they can be. These same experts are learning more about how beneficial icebergs can be for life too.

Icebergs, scientists are discovering, play host to all kinds of life — everything from tiny plantlike organisms called phytoplankton to enormous whales. This world of extreme cold and isolation bustles with surprising amounts of activity.

Identifying how and why animals choose to make their homes in and around icebergs hasn’t proven an easy task for scientists. Icebergs stretch to towering heights and even more dizzying depths. To study them underwater, scientists may sink scientific instruments hundreds of meters (yards) to the chilly seafloor. To understand what’s going on dozens of meters (yards) up on top, these experts may rely on remote-controlled aircraft. Meanwhile, waves may rock and soak scientists bobbing in nearby boats.

In fact, everything about studying an iceberg is challenging, explain Ken Smith and Ron Kaufmann. The two marine biologists have sailed through the frigid waters that surround Antarctica to get up close and personal with icebergs — but never too close. No matter how curious the researchers may be, they do most of their admiring from afar.

“When an iceberg breaks off from an ice sheet, the last place you want to be is anywhere near it,” says Kaufmann, of the University of San Diego.

“A lot of icebergs are cracked or fractured, and huge sheets can come off at any time,” adds Smith, a senior scientist at the Monterey Bay Aquarium Research Institute in Moss Landing, Calif. “They can drop a huge piece of ice into the water, and the problem is that it creates a huge wave, which could flood your ship.” Not surprisingly, he says, ship captains like to keep their distance. “If the iceberg is 40 meters (130 feet) tall, they want to stay 120 meters (400 feet) away,” he says.

‘Bergs in a climate of change

In Antarctica, the vast ice sheets that cover the continent are changing. The planet is warming, largely because human activities, such as burning fossil fuels, pump carbon dioxide and other greenhouse gases into the air. As a result, the ice is melting.

More melting means more icebergs calve, or break off, from the edges of the ice sheets where they meet the ocean. As these broken-off mountains of frozen freshwater float away, they can have an important effect on the ocean environment. That’s because icebergs contain much more than just water.

Icebergs also carry huge amounts of dust, dirt and rock scraped from the land. This rubble contains iron, an essential nutrient for phytoplankton. So melting icebergs don’t just release huge quantities of freshwater into the ocean — they also deliver a lot of the fertilizer that phytoplankton need for photosynthesis. With enough sunlight, carbon dioxide, iron and other nutrients, phytoplankton grow rapidly. And when there’s fresh food to be found, other critters come to eat. Soon, icebergs turn into floating inns, providing food and lodging for lots of organisms.

Crucially, tiny phytoplankton provide much more than dinner. They also gobble up carbon dioxide — about as much as do all the plants on land.

That could be a doubly good thing, since studies have shown carbon dioxide isn’t just a greenhouse gas. It also causes ocean water to become more acidic — and less hospitable to many forms of life.

Will iceberg communities help slow the rate at which global temperatures are rising? It’s still unclear. Scientists aren’t yet sure how effective icebergs and their guests are at limiting carbon dioxide, either locally or globally. They are also unsure what any related climate change will mean for ocean life.

Meanwhile, scientists like Kaufmann and Smith are looking for answers.

How to study an iceberg

It’s well known that icebergs hide 90 percent of themselves beneath the water. But in the 1990s, marine biologists began to suspect that icebergs might be hiding something else too. Among those biologists were Kaufmann and Smith.

During an expedition to Antarctica, the scientists lowered three expensive scientific instruments to the bottom of the Weddell Sea, part of the Southern Ocean. The researchers were trying to understand how an increase in Earth’s average temperature would affect deep-sea life. Their devices sent sound waves pinging upward through the water. Anything that swam by would reflect the sound waves back down to the devices on the sea bottom. The bigger the creature, the stronger the echo.

The experiment didn’t go as planned: Something, probably the crush of an iceberg, destroyed two of the devices. The third device survived, recording a flurry of animal activity each time an iceberg floated past. “We saw more animals around the iceberg than we saw when the iceberg wasn’t there,” Kaufmann says. The finding stumped the scientists: What was so appealing about icebergs for so many marine animals?

Although disappointed by the loss of their instruments, Kaufmann and Smith made plans to return to find an answer.

In December of 2005, the researchers joined a team of scientists traveling by ship to Iceberg Alley, an area in the Weddell Sea crowded with icebergs. The researchers spent weeks hopscotching among five giant icebergs, the largest of which towered nearly 40 meters (130 feet) above the water — the height of a 13-story office building. They returned to the area in June 2008, and again eight months after that, to study icebergs and to look for life.

Since the scientists couldn’t get too close, they had to get creative. They used lasers to measure the height of each iceberg, and underwater acoustic sensors to map their submerged parts. They measured how far a boat traveled when circling each iceberg to estimate its perimeter. And they launched a remote-controlled submarine, equipped with a net and a movie camera, to explore the frozen underbellies of several icebergs.

On the two latter trips, they brought along Paul McGill, an engineer at the Monterey Bay Aquarium Research Institute. McGill had helped design and build remote-controlled airplanes that could fly over and drop tracking tags atop the icebergs. These Global Positioning System, or GPS, tags could track and record where the icebergs traveled. Meanwhile, cameras aboard the planes would reveal to the scientists what was happening high on top, well out of sight.

“Once you leave an iceberg, it’s tough to get back to the same one,” McGill observes. “We knew that if we could get these tags on there we could leave and go back to the iceberg.”

The food chain: who eats whom

The iceberg explorations came at a cost: One remote-controlled submarine failed to return from its first voyage. And some of the remote-controlled planes could not withstand the blustery winds and crashed. Still, the effort paid off when the scientists began to discover the active life of an iceberg.

“It turns out there are a lot of different organisms affected by icebergs,” says Kaufmann.

The scientists first found lots of algae and phytoplankton, the tiny organisms that form the base of the marine food chain, growing on and around the icebergs. Nearby, the waters teemed with shrimplike krill, which feast on phytoplankton.

“Some krill live right on the surface of the iceberg, and as it moves through the water the krill rides along with it,” says Kaufmann. He doesn’t know if the krill hitched a ride with a passing iceberg or were present at the iceberg’s breakaway from the ice sheet. The scientists may never know: “It’s really hard to look at the side of an iceberg that hasn’t broken off the ice sheet,” Kaufmann says. It’s also “ridiculously dangerous,” he adds.

In fact, life-and-death struggles play out daily in and around icebergs and the water they glide through, far from the eyes of any human. Many larger organisms, such as fish, squid and penguins, eat krill — and then get eaten by leopard seals and killer whales.

Smith and Kaufmann still want to know how icebergs affect life much deeper in the ocean — and how the climate will respond to greater numbers of icebergs. As icebergs float, they melt and release freshwater and solid materials into the salty ocean. This mixture may affect the temperature and chemistry of the water. An iceberg’s sheer size probably has an impact too, Kaufmann says.

“A thousand feet (300 meters) below the surface, you can think of an iceberg like a large canoe paddle, made of ice, going through a swimming pool. It’s melting, but it’s also disrupting the water and changing the flow,” Kaufmann says. “It probably has a big effect on the whole physical environment, but we haven’t really nailed down that process yet.”

Cooling, fertilizing, changing, stirring … so what’s the combined impact of all of these icebergs? That’s a question that scientists want to answer, says Smith. For example, while the phytoplankton and algae around a single iceberg may gobble up carbon dioxide, researchers don’t know whether the effect is local, affecting just nearby parcels of air, or global. Knowing more about icebergs can help scientists understand the icy towers’ role as Earth warms.

“You can measure one individual iceberg and what’s going on around it, but it doesn’t tell you much about the larger population of icebergs,” Smith says. Using satellite data, Smith is figuring out how to apply his measurements of individual icebergs to icebergs’ overall behavior. Satellites help, since their perspective can help reveal, track and measure, by number and size, all the icebergs that break off an ice sheet.

Kaufmann says that even though he and his colleagues have had instruments crash, sink or just plain vanish, they have learned a lot about icebergs from what their surviving tools did measure. And if the researchers hadn’t chosen to explore one of Earth’s harshest environments, they never would have discovered the surprising diversity of life that icebergs can harbor.

“If you keep an open mind and keep your eyes open, you can learn a lot you didn’t intend to learn,” says Kaufmann. “Sometimes you just have to trust your observations.”

phytoplankton Tiny plantlike organisms that drift or float in water. Phytoplankton form the base of the marine food web.

krill A small, shrimplike crustacean. Krill feed on phytoplankton and are in turn eaten by fish, seals, birds and many other marine animals. 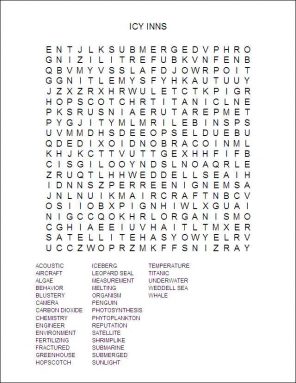 More Stories from Science News for Students on Oceans