CHICAGO — The deepest parts of the ocean are one of the planet’s last frontiers. Its ecosystem is Earth’s largest — and one of the least studied. Despite its many unknowns, the seafloor holds incredible promise as a source of many natural resources, including valuable metals. As the scramble for those resources speeds up, scientists are helping to create guidelines and laws that will allow this mining — while still protecting seafloor life.

“We have to balance the need for resources with the need to preserve the ecosystems for future generations,” says Lisa Levin. She’s a marine ecologist at the Scripps Institution of Oceanography in La Jolla, Calif. Levin and other experts met February 16 to discuss how to be better stewards of the seafloor ecosystem. Their discussion took place here at the annual meeting of the American Association for the Advancement of Science (AAAS).

Until recently, most people thought much of the deep ocean floor was a dark, dead and mucky wasteland. No more. Researchers now know it can be an active and vital place. For example, between 30,000 and 50,000 undersea volcanoes rise above the seafloor. Many fish live on their slopes, says Levin.

In some spots, methane — a form of natural gas — seeps from the ocean floor. There, bacteria that eat methane form the center of a rich food web. In other regions, hydrothermal vents pepper the seafloor. Scalding hot water rich in minerals spews from these sites. Those minerals nourish a variety of creatures, from barnacles and tube worms to mussels, shrimps and enormous bacteria that you can see with the unaided eye. Fueling all of these creatures are those chemicals being vented into the water.

“The seafloor is not a boring, muddy place,” says Levin. “Life there is very diverse.” The natural mineral deposits found in many areas of the seafloor also are diverse and valuable. Some of these deposits also are more pure than those atop land. They also are generally far harder to reach than are those on land. But technology is making the seafloor easier to reach. Together, says Levin, these features can make undersea minerals quite attractive.

Today’s high technology requires a variety of metals. As prospectors exhaust near-surface deposits of metals on land, they are turning their attention to the ocean bottom. Potato-sized lumps of minerals cover some seafloor areas. These nodules can be full of valuable metals such as iron and manganese. The sides of undersea mountains are crusted with minerals. Those coatings often are jam-packed with cobalt and other valuable elements. Likewise, the tall chimneys of minerals that form at many hydrothermal vents are rich in metals, including silver and gold.

Also among the vent metals: copper. This industrial metal is used in cables, wires, pipes and electronics. Many mining companies are now actively hunting new sources of the metal.

And no wonder. Half of all the copper that has ever been mined was unearthed in just the past 25 years, says Samantha Smith. She’s a marine scientist at Nautilus Minerals in Brisbane, Australia. Demand for this metal is predicted to double again in the next 25 years. That means that by about 2040 we will need as much copper as has already been mined worldwide throughout all of history, she reported at the AAAS meeting.

Smith’s company hopes that some of that copper will come from a seafloor site it would like to mine. Located in waters about 1,600 meters (1 mile) deep, the site is very remote. The nearest shore is about 30 kilometers (19 miles) away, on Papua New Guinea. (This nation lies in the southwest Pacific Ocean, north of Australia.) There, on the seafloor, mineral deposits created by hydrothermal vents hold a wealth of metals.

Mining just 11 hectares of the seafloor at this location (a region equal in area to about 21 U.S. football fields) could produce about $900 million worth of copper, Smith says. Other metals in the deposits would bring in even more money. Plus, Smith notes, the sulfur in the deposits could be used to make valuable chemicals used by many industries, including sulfuric acid.

Nautilus Minerals wants to start by breaking up the mineral deposits into small bits on the ocean floor. Then, big vacuums would slurp up the bits (along with large volumes of water), hoisting them to ships at the surface. There, the water would be filtered and pumped back through hoses to the seafloor. Only the minerals would be hauled back to shore.

What are the laws?

Rules for mining the deep sea are sometimes complicated. The rights and responsibilities are clear only for those areas near to shorelines, says Kristina Gjerde. She’s a lawyer in Konstancin-Chylice, Poland, who works with the International Union for the Conservation of Nature. For deep-sea sites beyond a nation’s borders, mining rules can be confusing.

For example, the International Seabed Authority controls the extraction of minerals from the seafloor in international waters. Another set of rules, put together by a different group, controls activities in the actual water above. But no one group regulates the impacts of seafloor mining on, say, fishing.

Even though no one is mining the deep seas now, further rules to guide such activities are being developed, says Gjerde. Already, various nations and companies have permits to explore for minerals at 19 deep-sea sites. Depending on the actual licensing process, some could start mining as soon as 2016, she says.

What about the wildlife?

Cindy Van Dover wants scientists to conduct more research on seafloor life. She’s a deep-sea biologist and director of the Duke University Marine Laboratory in Beaufort, N.C. Scientists, she says, also should help regulators ensure that laws for deep-sea mining don’t overlook activities that should be controlled. In particular, mining should avoid ecologically sensitive sites, she says. And where mining does occur, she argues that it should be allowed only where it would cause little damage.

But knowing what damage might occur will prove a challenge, especially where life is involved. Only a small fraction of the species inhabiting the ocean depths has been discovered, Van Dover says. And, she adds, many of those that have been discovered haven’t been studied in detail.

“This is the least known wilderness on our planet,” she notes. That means “there’s a lot to learn.”

For example, scientists often don’t know the precise role that each creature plays in an ecosystem. They do know, though, that many important biochemical processes occur in their midst. For instance, seafloor sediments represent a vast and growing storehouse of materials rich in carbon. They pile up there as the remains of dead creatures fall to the ocean bottom. Microbes in seafloor sediments feed upon that material, using the nutrients it contains to grow. Then, creatures higher up the food web feed upon them. This process and others help extract nutrients from the sediments and move them elsewhere within the ecosystem.

“The deep sea is a vast repository of resources,” says Van Dover. “We have to figure out how to extract those resources with the least effect on the ecosystem.” After all, she warns: “We can’t fix the deep sea if we mess it up.”

copper  A metallic chemical element in the same family as silver and gold. Because it is a good conductor of electricity, it is widely used in electronic devices.

ecology  A branch of biology that deals with the relations of organisms to one another and to their physical surroundings. A scientist who works in this field is called an ecologist.

ecosystem  A group of interacting living organisms — including microorganisms, plants and animals — and their physical environment within a particular climate. Examples include tropical reefs, rainforests, alpine meadows and polar tundra.

hydrothermal vent   Openings at the bottom of the ocean or a lake where hot water emerges from deep inside the earth. The water is rich in minerals and chemicals that can nourish ecosystems of worms, clams, microbes and other organisms.

manganese nodule  A lump ofminerals rich in the metals iron and manganese, among others. These slow-growing lumps, often the size of potatoes, form on the ocean floor when dissolved minerals crystallize around a small particle.

methane  A hydrocarbon with the chemical formula CH4 (meaning there are four hydrogen atoms bound to one carbon atom). It’s a natural constituent of what’s known as natural gas. It’s also emitted by decomposing plant material in wetlands and is belched out by cows and other ruminant livestock. From a climate perspective, methane is 20 times more potent than carbon dioxide is in trapping heat in Earth’s atmosphere, making it a very important greenhouse gas.

microbe  (short for microorganism)A living thing that is too small to see with the unaided eye, including bacteria, some fungi and many other organisms such as amoebas. Most consist of a single cell.

mineral  A chemical compound that is solid and stable at room temperatures and has a specific formula, or recipe (with atoms occurring in certain proportions) and a specific crystalline structure (meaning that its atoms are organized in certain regular three-dimensional patterns).

mineral deposit  A natural concentration of a specific mineral or metal

mineral exploration  The act of searching for new deposits of valued minerals, which can include metals, gems or fossil fuels.

sediment  Material (such as stones, sand or clay) deposited by water, wind or glaciers. 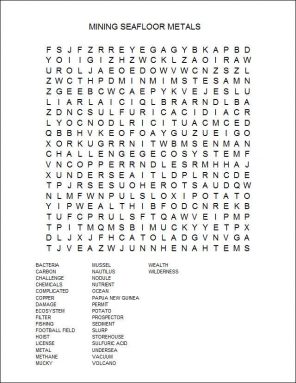