WASHINGTON, D.C. — When someone suffers a devastating injury, everyday tasks can become difficult, if not impossible. A person who loses an arm or hand can’t grip and turn a doorknob. For someone in a wheelchair, even a small step can block their way. But on February 15, researchers at a major science meeting described a host of new devices being developed to overcome such physical limitations. Many are now undergoing early testing. They won’t be for sale soon. But one day in the not-too-distant future, advanced versions of these devices could make life easier for many people.

Take, for example, someone who has lost the use of their hand. That’s a problem more common than most people realize, says Kyu Jin Cho. He’s a mechanical engineer at Seoul National University in Korea. About 500,000 people end up in a wheelchair each year. Of those, around half also suffer injuries to their hand, Cho notes. And that number doesn’t include the people who sustain injuries just to their hands.

To deal with this, Cho and his team have designed a glove made from a flexible, rubberlike material. It has three fingers that fit over the wearer’s thumb, index finger and middle finger. Wires attached to those fingers can be moved by a small motor. The motor, controlled by a simple switch, pulls on the wires to open and close the hand. The result is a glove that can help people grip objects.

Other researchers have designed gloves that pick up nerve impulses from a user’s arm muscles to help control a glove’s motions. But those earlier devices were relatively complicated. If produced, they would be costly, notes Cho. People who have tested the Exo-Glove Poly like its simplicity, he says. Another benefit: It’s waterproof. That means users can wash their hands or clean dishes while wearing it. The glove also can be removed and washed when it gets dirty.

This Korean team was among research centers describing new technologies, last week, for people with serious physical handicaps. They showcased their devices, here, at the annual meeting of the American Association for the Advancement of Science (AAAS).

Some people suffer spinal injuries that cause their arms or legs to become paralyzed. In many cases, the injury severs connections between nerves in the arms or legs and the spinal cord or brain. Now when the brain tells the limbs to move or the nerves’ pick up a sensation of pain, that message can’t get through to its target, notes Ronald Triolo. He works at Case Western Reserve University in Cleveland, Ohio, as a biomedical engineer. These researchers use science and math to create things like medical devices.

Triolo’s team is looking to assist the nerves and muscles that remain healthy but are no longer connected to each other. To do that, they have designed an electronic device to stimulate the nerves. It’s similar to the way a pacemaker zaps a heart to trigger its contractions. Their device instead triggers leg movements.

The first step involves surgery to implant electrodes next to nerves in the paralyzed leg. Doctors can then send small electrical impulses to make one or more muscles contract. With just one electrode, doctors can make a muscle trigger a simple motion.

Actions such as walking, or opening and closing a hand, however, are very complex. They require the coordinated motions of many muscles. Not only would many switches be needed, but they also would need to be stimulated in a precise sequence, or pattern. That means a simple on/off switch like the one used in Cho’s Exo-Glove Poly wouldn’t be suitable to help someone walk. Instead, a person would need a small computer.

Triolo’s team has come up with just such a device. Using the right sequence of electrical signals to stimulate a paralyzed person’s leg, it can make the motions that would be needed to ride a bike.

A paralyzed person might not have the balance to ride a two-wheeled bike or the ability to stop and get off safely. But the electronic device driving their leg muscles might make tooling around on a three- or four-wheeled bike possible.

Or the user might ride a stationary bike to get some exercise. Even that would be a good thing, Triolo notes. Studies have shown the exercise would increase blood flow in ways that could help keep muscles from wasting away due to lack of use. That wasting is known as atrophy (AA-troh-fee).

Often it takes years from when an engineer first has an idea to the time a useful product becomes available for sale. That delay can be especially frustrating when the device is intended to help someone who is disabled. But a new engineering competition might help speed innovations from the lab to the people in need.

It is called Cybathlon (Sy-BATH-lon). The name plays off of the idea that this is a contest for cyber-systems. This event is intended to prompt new and more muscle-assisting research across an array of disciplines (such as medicine, robotics, engineering and chemistry), says Robert Riener. He’s a mechanical engineer at the Swiss Federal Institute of Technology in Zurich. He’s also an expert in designing prosthetic limbs. These devices take the place of missing body parts.

The first Cybathlon is scheduled for October 8 in Zurich. There, 80 teams will compete, says Riener. Teams can be any size but must include a disabled person to demonstrate a candidate device that has been designed for his special needs. Already, more than 70 teams have registered. They come from all continents except Antarctica.

The competition will feature events for six types of technologies. One event will involve riding a three- or four-wheeled bike over a distance of about 800 meters (0.5 mile). Other than getting a small boost from launching down a short ramp, the bikes must be powered by the paralyzed person pumping the pedals. Their muscles must be controlled by electronic devices similar to those being developed by Triolo and his team.

Other events involve using various types of prosthetic limbs or hands to perform everyday tasks, such picking up a ball or clothes-pinning a piece of paper to a rope. Yet others call for stair-climbing wheelchairs or motorized braces that help power someone’s gait as he or she walks through a simple obstacle course. In one event, severely paralyzed people will even control a video game with brain signals delivered by sensors from a cap covering their heads.

“The competition isn’t focused on strength or speed,” explains Riener. “It’s all about completing tasks successfully.” Competitions such as this could help speed the design process for such assistive devices, he says. The events also are intended to raise awareness of the range of skills such robotic devices can offer.

For now, Riener plans to have a Cybathlon every four years. But if it is successful, maybe it could be held every two years, he notes.

And expanding the number of events would be very useful, says Cho. People have many sorts of disabilities, he notes. The more events there are, the more people that the competitors could eventually help.

atrophy    (In medicine) A gradual loss of function due to underuse. Muscle atrophy is a particular problem for people who are bedridden or paralyzed.

biomedical engineer    An expert who uses science and math to find solutions to problems in biology and medicine; for example, they might create medical devices such as artificial knees.

chemistry   The field of science that deals with the composition, structure and properties of substances and how they interact with one another. Chemists use this knowledge to study unfamiliar substances, to reproduce large quantities of useful substances or to design and create new and useful substances. (about compounds) The term is used to refer to the recipe of a compound, the way it’s produced or some of its properties.

cyber   A prefix that refers to computers or to a type of system in which computerized or online communication occurs.

electrode  (in brain science) Sensors that can pick up electrical activity. (in chemistry) Materials that serve as an anode or cathode, attracting negatively or positively charged particles. Or things that serve as electric conductors through which current leaves or enters something else.

electronic   An adjective that descirbes devices that are powered by electricity but whose properties a re controlled by the semiconductors or other circuitry that channel or gate the movement of electric charges.

engineering   The field of research that uses math and science to solve practical problems.

innovation    (v. to innovate) An adaptation or improvement to an existing idea, process or product that is new, clever, more effective or more practical.

mechanical engineer   Someone who uses physics and materials science to design, develop, build and test mechanical devices, including tools, engines and other machines.

muscle  A type of tissue used to produce movement by contracting its cells, known as muscle fibers. Muscle is rich in a protein, which is why predatory species seek prey containing lots of this tissue.

nerves Long, delicate fibers that communicate across the body of an animal. An animal’s backbone contains many nerves, some of which control the movement of its legs or fins, and some of which convey sensations such as hot, cold, pain.

pacemaker    A small medical device implanted in the body to help control abnormal heart rhythms. This device sends an electrical signal. It stimulates the heart to beat at a regular and healthy rate.

paralysis  The inability to willfully move muscles in one or more parts of the body. In some cases, nerves that carry the signal to move may have been severed or damaged. In other cases, the brain may be the source of the problem: It may fail to understand or act on a nerve’s signal to move.

polymer    Substances whose molecules are made of long chains of repeating groups of atoms. Manufactured polymers include nylon, polyvinyl chloride (better known as PVC) and many types of plastics. Natural polymers include rubber, silk and cellulose (found in plants and used to make paper, for example).

prosthesis    (plural prostheses) An artificial device that replaces a missing body part. Such a prosthetic limb, for example, would replace parts of an arm or leg. These replacement parts usually substitute for tissues missing due to injury, disease or birth defects.

prosthetic    Adjective that refers to a prosthesis.

prototype    A first or early model of some device, system or product that still needs to be perfected.

sensor   A device that picks up information on physical or chemical conditions — such as temperature, barometric pressure, salinity, humidity, pH, light intensity or radiation — and stores or broadcasts that information. Scientists and engineers often rely on sensors to inform them of conditions that may change over time or that exist far from where a researcher can measure them directly.

spinal cord    A cylindrical bundle of nerve fibers and associated tissue. It is enclosed in the spine and connects nearly all parts of the body to the brain, with which it forms the central nervous system.

technology  The application of scientific knowledge for practical purposes, especially in industry — or the devices, processes and systems that result from those efforts. 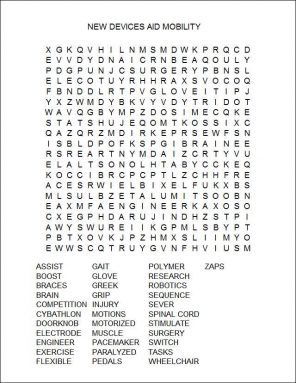