Flip a switch and you can turn on or off lights, fans and all sorts of other things. Individual nerve cells in the brain are now the latest addition to this list. Over the past decade, scientists have found a way to use light to control the brain’s nerve cells, or neurons.

This new field is called optogenetics (OP-toh-jeh-NEH-tix). Opto– is a prefix that refers to light. Genetics deals with the biological instructions encoded in our genes. As its name suggests, this new technology uses light to either turn on or shut down genetically programmed actions in brain cells.

Keith Bonin calls this technology “revolutionary.” He says it “is going to allow us to much better understand how the brain works.” A physicist, Bonin works at Wake Forest University in Winston-Salem, N.C.

The brain acts as command central for everything we do. It’s a hive of neurons — an estimated 86 billion of them. The brain also contains many different types of neurons. As many as 100,000 of the very smallest would fit on the head of a pin.

To understand how animals move, learn or behave, scientists used to have to wait and watch, hoping they would be there when an anticipated event or behavior might occur. No longer. With optogenetics, scientists now can turn on these tasks or behaviors with the flip of a switch. A light switch.

This new technology is opening up new pathways for research. For instance, scientists are learning more about what goes right in healthy brains — and wrong when brains are afflicted by various disorders.

In many ways, the brain is a living computer. It receives data, processes them into information and then generates a response. And the brain does these things with electricity, just as computers do.

With a computer, however, you can easily enter data and then run a program to see what happens. Researchers have long wanted to do that with the brain. But it hasn’t been easy.

“There’s no keyboard for the brain,” notes Ed Boyden. He’s a neuroscientist at the Massachusetts Institute of Technology (MIT) in Cambridge. He was on the research team in 2004 that first got optogenetics to work.

Proteins are molecules that form the basis of living cells and other tissues. Many also serve as molecules that perform actions in and around cells. Boyden’s group identified proteins that were sensitive to light. They became the key to optogenetics.

Your eye contains opsin (OP-sin), one of these proteins. When light reaches cells of the retina at the back of the eyes, opsin triggers electrical signals. Immediately, those signals shoot to the brain. The brain then translates those signals into sight.

Lots of bacteria, fungi, algae and plants have opsins too. Many opsins work like gatekeepers. Think of the gate as a one-way turnstile, says Bonin. When light hits the turnstile, the opsin allows an ion — an atom or molecule with an electric charge — to pass through. Depending on the gate, an opsin can either turn a neuron’s action on or off.

Some gates let in positively charged sodium or hydrogen ions. That action produces an electric current. If the current reaches a certain level, the neuron turns on, firing off an electrical impulse. Other gates release negatively charged chloride ions. These can turn a neuron off. That stops its firing.

The brains of animals generally don’t have opsins. But scientists can engineer cells in an animal’s brain to make them. They do this by inserting genes from other organisms. Through this genetic engineering, the added genes instruct their new host cells to make opsins.

To get light to those cells, researchers implant tiny fiber-optic probes — essentially plastic wires — into the brains of lab animals , such as mice or rats. “When we shine light through this probe, the light goes directly into the brain,” Zayra Millan explains. She’s a neuroscientist at Johns Hopkins University in Baltimore, Md. As light reaches a neuron, its new opsin starts to work as a gatekeeper. For instance, if the gates open and the current reaches a threshold level, the neuron will fire off an electrical impulse.

This electrical impulse travels down the cell to its end point, or terminal. There the impulse triggers the release of some chemical (a neurotransmitter) across a small gap. That gap, called a synapse (SIH-napz), separates the chemical’s transmitter from its receiver on some neighboring neuron. This process, Millan explains, is how one brain cell talks to its neighbor.

“This is really the heart of how the brain works — synaptic transmission,” says Carl Petersen. He and Aurélie Pala are neuroscientists at the Swiss Federal Institute of Technology in Lausanne. They have used optogenetics to measure communication between individual nerve cells in a live mouse.

By adding opsin genes to certain lab animals, “we can genetically target specific cells,” Peterson explains. “And just by shining light on [those cells], we can activate them and see what types of signals are driven by the cells.” Just a millisecond of light may be all it takes to make a neuron fire, he notes.

He and Pala focused on a chemical messenger called glutamate (GLU-tah-mate). How much of it a cell sends across the synapse varies with the type of neuron on the receiving end, they found. Knowing that can help scientists explore further how different types of connections work. Their findings appeared in the January 7 issue of Neuron.

Dopamine (DOH-puh-meen) is another chemical used to relay messages around the brain. Brain neurons naturally release this chemical in a wide range of situations. Some neurons release dopamine to make the body move in certain ways. Others release it when an animal receives something or does something it finds pleasing or rewarding. Exercising and achieving a goal are healthy examples.

Neurons also can release dopamine in response to unhealthy behaviors, such as abusing alcohol or other drugs. Now, with optogenetics, researchers can test whether treatments that boost dopamine in the brains of lab animals will cut their desire for alcohol or drugs.

Two years ago, Bonin at Wake Forest University and his team used optogenetics to trigger the release of dopamine in a brain area called the nucleus accumbens (NU-klee-us Uh-KUM-benz). And sure enough, rats cut their alcohol consumption after 250 light pulses at the rate of 5 per second. A shorter period of flashes with more light pulses per second light did not have that effect. The scientists published their finding in Frontiers in Behavioral Neuroscience .

One recent study by Millan at Johns Hopkins also looked at alcohol consumption. It delivered five seconds of flashing light. The light stimulated a brain circuit that starts at the amygdala (Ah-MIG-duh-lah). This structure sits deep inside the brain. The circuit connects the amygdala to the nucleus accumbens. That structure also lies deep in the brain but nearer to the face.

“When we stimulated or turned on this circuit, we were able to stop our animals from drinking alcohol,” Millan says. She presented her findings in November 2014 at the annual meeting of the Society for Neuroscience.

Both studies are helping scientists better understand how brain circuits work. They also might suggest ways to treat addiction. For example, researchers might now identify which cells to target with drugs or other techniques.

In optogenetics, the color of light that a neuron “sees” also matters. The cells “respond to very specific frequencies,” explains Millan. (The color of light is typically measured in frequencies — or the number of wavelengths per second for this type of electromagnetic radiation.) In her rat studies, opsins in their brains cause certain neurons to fire only in response to blue light.

Green light, by contrast, was used in a recent study by Joaquim Alves da Silva. He’s a neuroscientist at the Champalimaud Center for the Unknown in Lisbon, Portugal. His team used this light to inhibit, or turn off, certain neurons that release dopamine in mice. The goal was to better understand the role that dopamine plays in movement. Such knowledge might lead to better treatments for people with disorders, such as Parkinson’s disease. Its characteristic tremors are triggered by a shortage of dopamine. Alves da Silva presented his team’s green-light data, too, at the 2014 Society for Neuroscience meeting.

Some opsins even respond to red light. In 2014, Boyden’s group found an opsin in algae that they called Chrimson. Red light makes this protein excite, or turn on, neurons. The team published its findings in the March 2014 issue of Nature Methods.

A second red-sensitive opsin can turn off firing in these neurons, Boyden’s group reported in the August 2014 Nature Neuroscience. They found this opsin, called Jaws, in a type of single-celled marine organism called an archaeon (Ar-KEE-on).

Finding such opsins expands the types of research scientists can do. For example, Bonin explains, a study might test whether turning on two types of nerve cells — each with a different opsin — gives different results from switching on just one.

Red light also has a longer wavelength than other colors. “If you aimed red light at the brain, it could go very deep,” Boyden notes. That means researchers might not even need a fiber optic probe to deliver this light to its target.

Turning neuron signaling on and off is not the only trick optogenetics can perform. Proteins besides opsins might let scientists affect other processes in cells.

Recently, scientists found a way to use light to control motor proteins in cells. “These are molecules that can literally walk and take steps of 8 to 30 nanometers along protein fibers that are present in the cells,” explains Lukas Kapitein. He’s a cell biologist at Utrecht University in the Netherlands. (A nanometer is one-billionth of a meter.)

Motor proteins move materials within a cell. But the proteins only do this when they are connected to their cargo. Think of how a trailer won’t haul goods until it is hitched to a truck that can tow it.

Kapitein and his colleagues found a way to use light to trigger that connection and get things moving. Now, he says, “We can really control transport action within the cell.” His team described how the process works, earlier this year, in the January 8 issue of Nature. The method can help researchers learn more about the shape, organization and function of cells in the brain and elsewhere.

Boyden’s group published the first study on optogenetics just 10 years ago this past summer.  Since then, this field has opened new ways to explore how neurons work. The next 10 years will teach researchers even more.

For instance, optogenetics “will help us improve our understanding of how to treat different psychiatric and neurological disorders,” Bonin predicts. This knowledge could lead to new medicines and therapies for a wide range of medical conditions.

One day, optogenetics might itself become a treatment. That’s even more likely if red light can reach cells without the need to implant probes. “One of the dreams is that you could do this noninvasively,” Boyden says — meaning without having to physically open the body or send a tool into it.

Imagine treating addiction, Alzheimer’s disease, Parkinson’s disease and other disorders with pulses of light. It all starts with shining more light on understanding how our brain works. 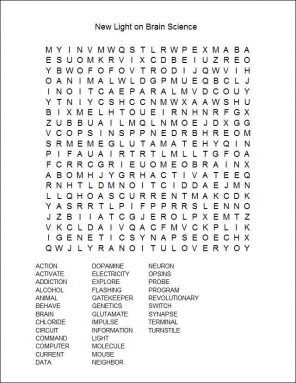