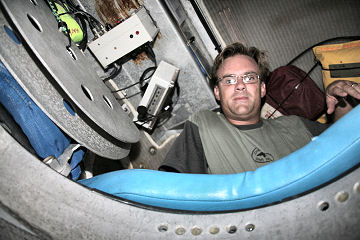 Reporter Mark Schrope gets cozy in the back of a Johnson-Sea-Link II submersible as it descends more than 1,500 feet below the surface of the Caribbean Sea.

I take my place in the cramped back chamber of a Johnson-Sea-Link II submersible. After about 10 minutes, a huge metal frame on the back of the main ship lifts the sub and then gently lowers it into the water.

For a few seconds, I can see waves washing against the porthole. Then the pilot, who sits in the front chamber, gives the mechanical commands that fill our ballast tanks with water. Slowly, the sub begins to descend.

We’re making our dive off the small island of Goulding’s Cay in the Bahamas. Our mission is to pick up an Eye-in-the-Sea (EITS) camera system that scientists sent down to take pictures of deep-sea life.

As the vessel drops deeper, the light begins to fade, and I move back and forth between the portholes on either side of the sub. At 600 feet down, I see the first speck of bioluminescence (the light chemically produced by most ocean animals).

Above water, the sun is still shining. But at these depths, the sunlight has faded, and it looks like dusk. Bioluminescent flecks of blue light—made by tiny animals called dinoflagellates—become more common as we go deeper.

At about 875 feet down, I begin to see larger flashes of blue light. One flash comes from a creature called a salp. The salp, which is related to jellyfish, makes a string of light about 2 inches long. Then a shrimp makes a corkscrew of light as it spins, excited by the movement of the submersible.

Soon bioluminescence becomes so frequent that it looks like a blue fireworks show out there. The show ends quickly, however, when the pilot turns on the vehicle’s powerful lights.

We come to rest at about 1,590 feet below the surface of the water. The pilot begins searching for the EITS camera system. He uses an underwater telephone system to communicate with the ship above. He tells the ship’s crew that we’re having trouble finding the system.

While the pilot searches for the EITS, I gaze out at the spectacular seascape that surrounds us. I know that in some areas of the deep sea, corals and sponges grow in abundance. They are as colorful and alive with fish as any shallow-water coral reef. At first glance, however, things are very different here. In fact, it looks almost deserted.

But as we move around, I see a variety of animals. And the animals change as we go from place to place. At one spot, I see mostly crinoids, which are animals that look like big dandelion flowers on top of brownish stalks. Nearby are sponges that look like beige rocks.

At first, I see only a few starfish hanging on to sponges and crinoids. Then we come to a place where starfish seem to be everywhere.

Sadly, I also see signs of human intervention—a bottle and an old tire that have been tossed from boats. Both will probably remain on the seafloor for thousands of years or longer.

Finally, we find the EITS. The pilot discovers that there are some problems with a rack on the front of the camera system and other problems with the submersible. He decides to leave the EITS in place for now. He’ll pick it up on the next dive.

After about 2 hours underwater, we begin our ascent to the surface. We may not have completed our official mission. But for me, the opportunity to see the wonders of the deep sea firsthand was an unforgettable experience.