Pittsburgh’s many hills aren’t kind to bikers. Anyone hoping to pedal to work there has to contend with steep streets like Canton Avenue, which famously climbs at a nearly 40-degree angle. As a result, some residents avoid biking altogether.

But University of Pittsburgh graduate Micah Toll, 23, and a few friends recently launched an invention that they hope will increase the city’s pedal power: An electric bike called a Pulse PEVO. A superstrong battery powers the bicycle. Able to hit nearly 20 miles per hour without pedaling, it zips up the city’s most daunting hills. Toll hopes it will persuade people in Pittsburgh and elsewhere to get out of their cars and onto bikes.

If it sounds like Toll has a knack for fixing problems, that’s because he does. In high school, he designed a new type of construction beam, one made out of foam. It weighs no more than a feather pillow but can be used to build sturdy homes for refugees fleeing war or natural disaster. For his work, Toll was invited to attend the Intel International Science and Engineering Fair — twice, in 2006 and 2007. The annual competition for young researchers is a program of Society for Science & the Public (that’s the parent organization of Science News for Kids). Toll says that when it comes to science, he keeps it simple: “You see a problem and say, ‘How could I solve that?’”

He’s not the only one to take that approach. Many young researchers get their start by trying to solve a problem or fulfill a need in their own communities. When students dedicate themselves to finding a solution that may benefit their community, “a passion is ignited,” says Wendy Hawkins, executive director of the Intel Foundation, which sponsors Intel ISEF. “Finding that passion and fostering it can be the key to many students’ future success,” she says.

Students can find inspiration for their research almost anywhere. Newspapers, magazines and even TV are good places to start. Toll, for instance, decided to engineer a new way to build homes for refugees after seeing TV reports about families displaced by violence in Afghanistan.

Michelle Lee, 18, a recent graduate of North Allegheny Senior High School in Wexford, Pa., looked a little closer to home. In the eighth grade, she read a tragic story in a national newspaper about several high school wrestlers who died from a skin infection caused by the bacterium known as MRSA. The initials are short for methicillin-resistant Staphylococcus aureus. Standard antibiotics, such as methicillin, often won’t kill this germ. Herself a competitive athlete (in high school, Lee played tennis and rowed on a crew team), she was very concerned for her classmates. “I wanted to see how we could prevent MRSA,” she says.

It’s important to do your homework before taking on a science project, the young woman says. So she read more news stories — and scientific papers, too. Along the way, she learned that these bacteria spread easily from person to person through direct contact or contaminated surfaces, such as wrestling mats.

After getting to know the disease, Lee used math to answer a question: Under what conditions would it make sense for schools to test every single one of their athletes for MRSA? She calculated that such screenings should be performed when about 1 in every 10 athletes has MRSA.

Lee’s work earned her a semifinalist spot in another research competition, the 2012 Intel Science Talent Search. But her study was just the start. She also spoke to classes at her high school, educating students on how to slow the spread of skin infections. She hopes to study health at Harvard University, where she’s enrolled this fall. That could help to keep her fellow athletes on the court and in the ring.

Sometimes family can inspire a passion to help others through science. Just ask Brett Gossett, 18, who recently graduated from John F. Kennedy High School in Bellmore, N.Y. About two years ago, Gossett’s cousin, then a second-grader, was diagnosed with attention-deficit/hyperactivity disorder, or ADHD. People with this behavioral impairment have trouble concentrating and staying still.

Around the time he was diagnosed, Gossett’s cousin’s grades started to drop. And it wasn’t because the child slacked off on his assignments. In fact, he worked as hard as ever. So Gossett began to wonder whether his cousin’s teachers were unknowingly treating the young student differently and grading him harder because of his recently diagnosed ADHD. Because ADHD isn’t a disorder that people can see, Gossett notes, many people don’t consider it a real disability.

So Gossett teamed up with his cousin’s doctor, a psychiatrist at a nearby hospital. Together, they conducted a simple test. With the doctor’s help, Gossett wrote a series of nearly identical essays, changing only a few details here and there. Some of these essays were supposedly written by a student with ADHD, others by a student with cerebral palsy. Because cerebral palsy affects the brain and muscles, people with this movement disorder can have difficulty getting around.

Gossett mailed the essays to hundreds of middle-school teachers and asked them to grade the work. He told teachers these essays were for a scholarship contest.

The teen researcher discovered that teachers gave worse grades — even on grammar — to essays supposedly penned by a student with ADHD, compared with those supposedly written by a student with cerebral palsy. The finding suggested that the teachers had a bias against people with ADHD. Gossett’s research earned him a spot as a 2012 Intel STS semifinalist. He also won fourth place in the behavioral and social sciences category in the 2012 Intel ISEF. He says his family hopes that the study will help other young students with ADHD.

And that’s one of the best things about science, adds Gossett: It can help spread awareness. If there’s something going on in your community that you find unfair, he says, you may want to consider developing a research project that addresses the issue. It just may help.

Looking to green the environment

Another Intel STS semifinalist, Sinko designed a new way to clean up a particularly nasty family of pollutants. Known as polycyclic aromatic hydrocarbons, or PAHs, these molecules are produced by the burning of fossil fuels, including those used to power diesel cars and trucks.

If you’ve ever seen a long, black streak running down a storm gutter, there’s a good chance it contains one or more PAHs, Sinko says. His cleaning method relies on a simple concoction: a common bacterium mixed with linoleic acid, an ingredient of many vegetable oils. When sprayed on diesel waste, the oil and the bacterium begin to break down the pollution.

In developing this new treatment, Sinko had help. During one phase, for example, he needed to test soil samples to see if they contained PAHs. So he contacted researchers at a nearby university to gain access to the right equipment. The scientists there were happy to assist.

“Don’t be afraid to call up people you don’t know and ask them for help,” Sinko advises young scientists. And, he adds, the best resources are your teachers. In fact, he used to stay after school so that he and his teacher, Ms. Nolan, could review topics like how bacteria digest certain foods. High school scientists really can make a difference in the world, he says. “But you can’t do it alone.”

Dominique Evans-Bye is one of those teacher resources. At Clark Magnet High School in La Crescenta, Calif., she focuses on a subject that most students don’t study before college — geographic information systems, or GIS. This technology uses computer maps to solve scientific problems. Evans-Bye’s students have used GIS to study everything from how earthquakes in California might wreck school buildings to how ozone pollution increases the likelihood someone will develop asthma (a lung disease). Her eager pupils won a research competition called the Lexus Eco Challenge in 2012 for their studies on ozone.

Evans-Bye says that she was passionate about science when she was a youngster. She conducted simple experiments, such as breeding different colored hamsters to see what color their offsprings’ fur would be. But she never got a chance to do real research until college. So, “I try to give the kids a little experience or feel of what it would be like to be a scientist,” she says.

One challenge: High school students don’t have a professional scientist’s time or money. So, before her students begin, she organizes a special brainstorming class in which they suggest ideas for projects. For each idea, Evans-Bye asks: Would materials for this project cost more than a student can afford? Would running the tests or collecting the data take too long? Indeed, she notes that data gathering is often the most time-consuming part of a research project. So she always points would-be researchers to organizations that provide free, ready-to-analyze data to anyone. One of these sources is the U.S. Environmental Protection Agency.

No matter how small a science project may be, it can still make the world a better place, says Sydney Bergman. She’s a biology teacher at the School Without Walls in Washington, D.C. Her students have competed in a number of science competitions, including this year’s Intel STS. One of her students investigated how too little sleep can harm people — a project inspired by the high school student’s own late nights spent studying.

“It’s the nature of science that everyone contributes a little bit to the field,” Bergman says. “So it’s not a stretch in telling students that their ‘little bit’ can help advance things.”

She says that taking on a science project gives students a good head start in life, teaching them some basic skills — time management, for one. “Learning to maximize lab time is key to getting good research done,” Bergman says. “However, most students, like most people, tend to be a bit last-minute. Doing lab work helps people get over that tendency.”

And research certainly can broaden your world, says Yale University student Brandon Li. At the 2010 Intel ISEF in San Jose, Calif., he presented a new, cheap way to filter bacteria and other harmful particles out of drinking water. His design could improve the health of millions of people across the world who don’t have access to clean water. 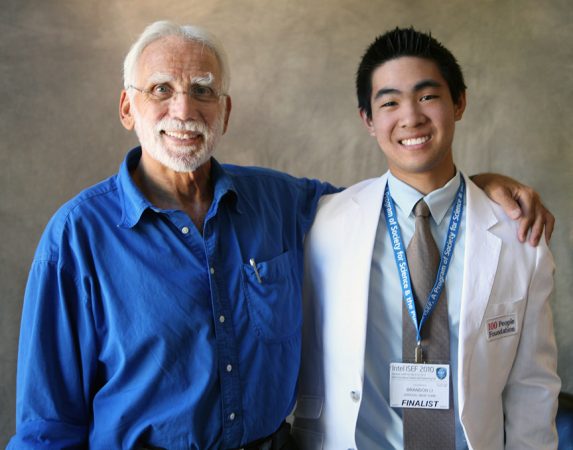 Li says he took this resource for granted before he started his work. He just turned on the tap, and there was clean water. Today, he feels that he has a responsibility to help those without the same luxury. “This [project] got me to understand that I am not one person living on a planet by myself.”

More Stories from Science News for Students on Science & Society