You’ve probably listened to music or sports on the radio. Teenage and tween-age researchers from around the world did more than just listen to the radio, this past May. They built one!

All were middle-school delegates to the 2015 Broadcom MASTERS International  program. To be chosen, each had earlier exhibited an outstanding research project in science, technology, engineering or mathematics. These are the so-called STEM fields. And like STEM, MASTERS also is an acronym. It stands for “Math, Applied Science, Technology and Engineering Rising Stars.”

Broadcom Foundation sponsors both a U.S. competition and this companion international program. Projects by this year’s international delegates covered topics as varied as slime molds, running shoes and spacecraft. The young researchers convened in Pittsburgh, Pa., at the Intel International Science and Engineering Fair, or ISEF. (The Society for Science & the Public runs the Broadcom MASTERS, Broadcom MASTERS International and Intel ISEF. It also publishes Science News for Students.)

Two-dozen international MASTERS delegates built radios during a visit to Carnegie Mellon University. Tom Sullivan is an electrical and computer engineering professor at the Pittsburgh school. Working in his lab, each young researcher received a kit with a circuit board, wires, electronic components and instructions. Graduate student Alexei Colin explained how to use the kit. Then the budding engineers got to work.

A radio does three basic things. First, it harvests radio waves. Those waves are part of the electromagnetic spectrum, which is all around us. Second, the radio changes the signal from a selected station into an electric current. The force of that current, or its voltage, varies based on the sound information coded in the electrical signal. Finally, the radio converts that varying voltage into sound waves that we can hear. To make all that happen, the Broadcom MASTERS students each built their very own radio.

An electrical diagram told the young researchers where to place each of the kit’s parts on the circuit board. The students had to make sure they connected some pieces to the circuit board in the right direction. If any of these went in backward, the radio might not work. Or worse. If the parts were assembled incorrectly, the electric current might damage the radio’s parts.

The do-it-yourself kits included diodes . These work like one-way gates for an electric current. On each diode, a black band denoted its negative end, or cathode . To work properly, it had to go into a hole marked with a vertical line on the electrical diagram.

Additional parts perform other jobs. Those functions make electronic circuits work in radios — and lots of other electronic devices. Resistors, for instance, reduce the flow of current. And capacitors (kuh-PASS-it-terz) temporarily store energy.

The radio’s pieces didn’t just snap into place. Each had to be soldered (SAAH-derd) to the circuit board. Solder is a metal that melts easily. It is used to join together metal pieces. To attach a component to the circuit board, the students used a device called a soldering iron, which preheats parts to be joined. They also added a bit of a gooey compound. Then they melted a bit of solder between the parts. The rosin-based goo, called flux, helped the solder flow around the hole in the circuit board where the piece was to be joined. This ensured a good contact.

The students patiently soldered parts in place. Even so, the process was sometimes tricky. “Trying not to burn myself was really hard,” noted 13-year-old Isabella O’Brien of Canada.

Getting everything into place at the same time got awkward, too. “I had a couple of parts that weren’t physically touching the board,” says 13-year-old Raghav Ganesh of San Jose, Calif. “It’s like you needed some sort of third arm to make it easier.” Without physical contact, current can’t flow through the radio within a closed circuit. In other words: The radio wouldn’t work.

The radio builders eventually connected larger parts to the circuit board. The antenna was an iron rod with wire coiled around it. The antenna’s job is to grab radio waves from the air. A tuner let the system select — tune into — different radio stations. A microchip served as an amplifier. It made the radio’s sound louder as it came out through a speaker. And a 9-volt battery powered the radio.

Even squeezing the battery into its plastic holder proved a challenge. “You have to push really hard,” said Jack Pollock, 14, of the United Kingdom, as he helped Kristyna Bednářová, 13, of the Czech Republic.

The students built AM radios. These letters stand for amplitude and modulation. That means the sound information decoded by the radio is a reflection of the strength, or amplitude, of the electromagnetic waves that it picks up.

AM carried the first commercial radio broadcasts. Today, FM radio is more popular in many areas. FM stands for frequency modulation. FM radio decodes sound information from slight changes in the frequency of the waves.

Yet AM radio is still important. For one thing, emergency broadcast systems use AM radio. An AM station can broadcast over a bigger area than an FM station can. An AM radio is also simpler and cheaper than an FM one. As these students learned, people can fairly easily make their own battery-powered AM radios. “It’s very easy to grab a couple of household items and build something that will receive AM frequencies,” notes Sullivan, the Carnegie Mellon professor.

Just as importantly, building an AM radio lets these young people tune in to technology. “It is one of the simplest forms of radio to understand and is a great place for beginners and those interested in the broader field of wireless communications to begin,” he explains. And he should know. Sullivan built his own AM radio from a kit at age 9. He’s been hooked on electronics ever since.

Henry Samueli also got his start in electronics by building an AM radio. He made his while in middle school. Later he started the Broadcom Corp. and became its president. This company now makes semiconductors and other equipment for global communications. The Broadcom Foundation also sponsors the MASTERS programs.

Radio technology isn’t found just in radios. Your cellphone, laptop and wireless headphones all use radio technology. This technology also was key to the development of television, global positioning systems (GPS) and other various gadgets.

Along with plenty of memories, each of this year’s Broadcom MASTERS winners got to bring home a working radio. And with it came the satisfaction of knowing he or she had built it by hand.

Back home in Canada, Isabella had tried building circuits before. But they hadn’t worked. This time, though, she correctly placed and connected all the parts. “I’m really glad that for once it worked,” she says. “And I know how to do it if I want to do it again.”

Of course, the radios weren’t just for making.

“You want to listen?” offers 14-year-old Rafael Brustolin of Brazil. “It’s very cool. I love it!”

amplifier  A device that boosts the power of a signal. For example, amplifiers are often attached to electric guitars to make them louder.

amplitude  A measure of the height of a recurring wave in some signal, water or beam of radiation. In sound, wave amplitude corresponds with intensity — loudness or softness.

antenna  (plural:  antennae) In biology: Either of a pair of long, thin sensory appendages on the heads of insects, crustaceans and some other arthropods. (in physics) Devices for picking up (receiving) electromagnetic energy.

capacitor  An electrical component used to store energy. Unlike batteries, which store energy chemically, capacitors store energy physically, in a form very much like static electricity.

component  An item that is part of something else, such as pieces that go on an electronic circuit board.

current   A fluid body — such as of water or air — that moves in a recognizable direction. (in electricity) The flow of electricity or the amount of electricity moving through some point over a particular period of time.

diode  An electronic part that works like a one-way valve for electric current.

electromagnetic spectrum  The range of radiation that spans from gamma- and X-rays through visible light and on to radio waves. Each type of radiation within the spectrum typically is classified by its wavelength.

global positioning system  Best known by its acronym GPS, this system uses a device to calculate the position of individuals or things (in terms of latitude, longitude and elevation — or altitude) from any place on the ground or in the air. The device does this by comparing how long it takes signals from different satellites to reach it.

modulation  A variation in some regular aspect of a signal. (In electronics and telecommunications) The process of varying one or more properties of a periodic wave, called the carrier signal. The changes, or modulations, that are introduced typically contain coded information, such as sounds (such as voice or music) or numerical data.

radio  To send and receive radio waves; or the device that receives these transmissions.

radio waves  Waves in a part of the electromagnetic spectrum; they are a type that people now use for long-distance communication. Longer than the waves of visible light, radio waves are used to transmit radio and television signals; it is also used in radar.

router  A device that relays the Internet signal coming from a modem, either through wires or wirelessly, to devices such as computers or tablets.

semiconductor  A material that sometimes conducts electricity. Semiconductors are important parts of computer chips and certain new electronic technologies, such as light-emitting diodes.

Society for Science & the Public (or SSP)  A nonprofit organization created in 1921 and based in Washington, D.C. Since its founding, SSP has been not only promoting public engagement in scientific research but also the public understanding of science. It created and continues to run three renowned science competitions, including the Intel International Science and Engineering Fair (initially launched in 1950). SSP also publishes award-winning journalism in Science News (launched in 1922) and Science News for Students (created in 2003). Those magazines also host a series of blogs (including Eureka! Lab).

vertical  A term for the direction of a line or plane that runs up and down, as the vertical post for a streetlight does. It’s the opposite of horizontal, which would run parallel to the ground.

voltage  A force associated with an electric current that is measured in units known as volts. Power companies use high-voltage to move electric power over long distances.

wavelength  The distance between one peak and the next in a series of waves, or the distance between one trough and the next. Visible light — which, like all electromagnetic radiation, travels in waves — includes wavelengths between about 380 nanometers (violet) and about 740 nanometers (red). Radiation with wavelengths shorter than visible light includes gamma rays, X-rays and ultraviolet light. Longer-wavelength radiation includes infrared light, microwaves and radio waves. 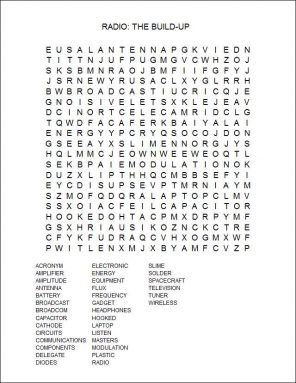