You probably don’t know how to answer that question — unless you happen to be one of the roughly 430 people in the world who speak a language called Matukar Panau. Then you would know it means, “How are you?”

Matukar Panau is one of the world’s rarest languages. It is spoken in just two small coastal villages in Papua New Guinea. This tropical island nation lies in the southwest Pacific Ocean.

Until five years ago, David Harrison, a language expert at Swarthmore College in Pennsylvania didn’t know much about Matukar Panau either. No one had ever recorded or even studied its words and rules. With so few speakers, the language risked vanishing without a blip. It was endangered.

An animal is endangered when its population becomes so rare that it faces a serious risk of going extinct. An endangered language has so few speakers that its words soon may never be spoken or heard again. Harrison didn’t want that to happen to Matukar Panau. So in 2009, he set out for Papua New Guinea. His goal: use modern technology to help the remaining speakers preserve their native tongue.

But Matukar Panau is far from the only language facing extinction. Studies suggest that by the end of this century, nearly half of the estimated 7,000 languages now spoken worldwide could disappear. They’re in danger partly because the only people left speaking them are elderly adults, Harrison says. When those individuals die, their language will die with them. In addition, children may feel pressure to abandon a native language and instead adopt more common global languages, such as Mandarin, Hindi, English or Spanish.

As a result, today there are many languages around the world that are spoken by no more than a few dozen elderly people. But some languages with many speakers also are at risk. Often, their descendants aren’t interested in working to learn the language and keep it alive.

Over the last decade, Harrison has traveled the world, finding these languages and helping save them for the future. (He writes about his experiences in a 2010 book, The Last Speakers: The Quest to Save the World’s Most Endangered Languages.)

Of all the places, he found, Papua New Guinea has the richest mix of languages. The island nation, only slightly larger than California, is home to 4 million people — and more than 750 languages.

But you don’t have to visit the South Pacific to find dying languages. In the United States alone, 134 Native American languages are endangered, according to the United Nations Educational, Scientific and Cultural Organization. Harrison says “language hotspots” exist all over the world. These are places with endangered languages that haven’t been documented. They include the state of Oklahoma, pockets of central and eastern Siberia, parts of northern Australia and communities in South America.

Linguists and other scientists record, share and study dwindling tongues so the value of the language won’t be lost. These researchers use modern technology, including voice recorders, MP3 players, computer software and online dictionaries, to preserve words and sounds that would otherwise vanish.

“We can’t always stop [language extinction] from happening, but we can make recordings of a language for future studies,” says Steven Bird. A computer scientist at the University of Melbourne in Australia, he develops software for recording languages. “People can preserve these languages now, while there’s still time,” he says.

Documenting a language before it goes quiet isn’t just an effort to preserve history. Linguists also can study the particular sounds, words and structure of a language to better understand how it is related to others. For instance, understanding how the English language’s roots lie in ancient Germanic tells a story about human history.

Languages also can provide unique insights into a place. For example, a native tribe may have lived in one remote region for thousands of years. That means its members know their natural surroundings better than anyone else. Their language may contain terms that reflect special knowledge about the local landscape, its plants and its animals, Harrison points out. This can aid scientists who want to study ecosystems near to where the language is spoken.

But Harrison sees his job as more than just aiding science. He appreciates helping members of these threatened cultures preserve part of their heritage. Many young people, he says, want to remember their own history — even as they engage with the rest of the world.

“I come across many people in their teens and early 20s who want to keep their heritage language because they value it,” he says. “They’re saying, ‘Hey, our language is important to us. If we lose it, we lose our identity.’”

Margaret Noodin can relate to that. She’s a linguist at the University of Wisconsin in Milwaukee. Growing up in Minnesota during the 1970s, she occasionally heard members of her family speaking Anishinaabemowin (Ah-neesh-ee-nah-beh-MO-win). It’s the language of the Ojibwe (Oh-JIB-way) Native American people.

Back then, speaking her tribe’s language was a risky move. That’s because the U.S. government had forbidden Native American tribes from practicing many of their customs, including some parts of religious ceremonies. That ban extended to their native languages.

“It didn’t count as a language in many ways, since it was illegal to teach and publish,” Noodin says.

Forty years ago, the American Indian Religious Freedom Act became law. It was followed, 12 years later, by the Native American Languages Act. These changed government attitudes. With these laws, the United States now recognized Native American cultural practices as valuable. And it again legalized the teaching and publishing of Native American languages.

That policy inspired a generation of people to preserve tribal heritage. Growing up in an environment where her language had been forbidden left a big mark on Noodin. She has spent decades since then studying the endangered language of her family. She also is working with other Native American tribes to preserve theirs.

Get the word out

One of the first things Harrison learned upon his arrival in Papua New Guinea was that the speakers of Matukar Panau wanted to get on the Internet. In particular, they wanted their language to be available online.

“That was surprising to me and my team,” Harrison recalls, “because no one in this community had heard or seen the Internet.”

However, these villagers knew the Internet existed. They also knew it was a powerful tool for learning and sharing information. So these people wanted a presence online. To help out, Harrison and his team started by bringing out voice recorders, video recorders and computers.

Together with the scientists, these villagers created a “talking dictionary.” This online resource provides translations between English and Matukar Panau. It also includes audio files, so users can listen to the correct pronunciation of each word. Harrison, along with fellow  linguists Gregory Anderson and Danielle Barth, unveiled this online dictionary in 2010. (See “Further Reading,” below, to visit the dictionary and learn a few words in Matukar Panau.)

That same year, electricity reached those remote villages. In 2011, the villagers at last could log onto the Internet. For many, a first stop in cyberspace was the talking dictionary they had helped create. It now includes more than 4,000 words. It also hosts 171 photos that illustrate those words.

“The first time they ever saw the Internet, they could hear the voices of their elders and see them speaking their language,” Harrison says. The moment was powerful because it showed these villagers “that their language is just as good as any other.”

Noodin also thinks the Internet and other modern tools can give endangered languages a fighting chance. To keep Anishinaabemowin alive, she’s turned to a variety of tools that bring together people who are interested in the language. Today, she estimates there are about 8,000 speakers of that language.

Most are older than 70. So to help others, she has created a Web page with reading and teaching materials in the language (including a children’s book). She’s also launched a Facebook page for people who speak the language. There they can post questions and messages for each other. She regularly texts in Anishinaabemowin too. Her typical greeting is Boozhoo! That means, “Hello!”

Digital tools also can make it easier for people to learn a language at their own pace, she notes.

“If I can give someone an MP3 [file], for example, he or she can just play it as many times as they want, and it’s helpful,” she says. With native languages, early learners often feel like they should easily be able to pick up speaking and writing. When they don’t, they can get discouraged. She says tools that let you learn at your own pace can ease the pressure you might put on yourself about learning — and therefore preserving — a native language.

Talking dictionaries and other tech tools

Bird, the University of Melbourne computer scientist, agrees with Noodin. The key to saving a language is to put the right tools in the hands of speakers, he says. Still, he points to one hitch: “There aren’t enough linguists to record all the world’s endangered languages.”

But easy-to-use technology might help. While in Melbourne, Bird and his students developed an application, or app, for mobile phones. It’s called Aikuma. The app allows users to record a person speaking. Then it plays back the recording, phrase by phrase, allowing the user to also record its translation into English (or any other language).

In March 2013, Bird put his app to the test. He traveled to Brazil, a hotspot that is home to about 200 languages. He traveled deep into the Amazon rainforest, hoping to find speakers of the Tembé language. Only about 150 people speak this endangered language. Once he found a village of Tembé speakers, Bird and his companions spent four days using the app to record their stories. And, with the help of a bilingual villager, they also translated those stories.

Bird visited other regions of the Amazon during that trip. There, he used his app to record and translate stories in two other endangered languages as well. He says this first experiment with the app was mostly successful, though he had hoped to capture even more recordings. Still, it showed that anyone, not just linguists, could use the app to record and translate a story. In the future, he hopes to return to the region, bringing with him even more smartphones loaded with his app. Sharing the right tools, he says, can help a small society share its language with the entire world.

“A language that was maybe never before outside a small village in Papua New Guinea can suddenly have a global audience,” says Harrison. He’s another believer in the transformative power of technology. “I see technology as playing a wonderful role in enabling small languages, through texting, social media and YouTube.”

With help and technology, people can amplify their voices. That can be true even if just a few people speak a language. “If we don’t hear them,” Harrison says, “we don’t know what they have to teach us.”

computer science  The scientific study of the principles and use of computers.

cyberspace  An informal term for the Internet.

digital  (in computer science and engineering)  An adjective indicating that something has been developed numerically on a computer or some other electronic device, based on a binary system (where all numbers are displayed using a series of only zeros and ones).

endangered  At serious risk of extinction.

extinction  The state or process of a species, family or larger group of organisms ceasing to exist.

linguistics  The scientific study of language.

online  A term that refers to things that can be found or done on the Internet.

Web  An abbreviation of World Wide Web. It is used as an informal term for the Internet. 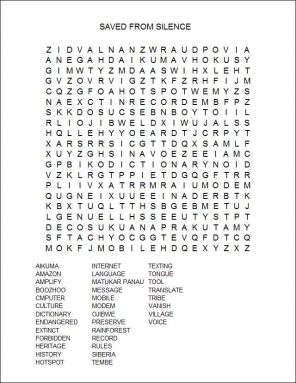