One day in 1975, a curious magazine editor knocked on Roy Caldwell’s door at the University of California, Berkeley. The journalist had come by to ask the marine biologist what he was working on. Caldwell walked his visitor over to a glass tank and pointed to its dweller: a mantis shrimp.

Mantis shrimp are crustaceans, a group of animals that includes crabs and lobsters. Although mantis shrimp resemble lobsters, they are more shrimp-sized. Most are 6 to 12 centimeters (2 to 5 inches) long. If anything, mantis shrimp resemble cartoon characters. Antennae that detect chemicals extend from their heads and stiff, paddlelike flaps on the sides of their head probably act as ears. Spines often decorate their tails. Big eyes on stalks bug out from their heads. And the animals come in dazzling colors, including green, pink, orange and electric blue.

But while pretty, mantis shrimp can be very violent. When Caldwell tapped the tank to provoke a mantis shrimp, the animal smashed back. “It broke the glass and flooded the office,” recalls Caldwell.

These unusual species fascinate Caldwell and other researchers — and not just because of the critters’ strength. The animals strike with lightning speed, clobbering prey with limbs that are incredibly strong. The creatures tune their vision to improve their sight, depending on how deeply they live in the ocean. Mantis shrimp also produce low rumblings, similar to sounds uttered by elephants.

As researchers learn about these strange species, they also are learning from them. Based on those lessons, engineers are discovering how to make new and better materials that people can use.

The animal got its name because it kills prey in a way similar to the praying mantis. Both creatures wield their folded forelimbs as deadly weapons. (And while both creatures are arthropods, they are not closely related.) Meanwhile, “shrimp” is a term used to refer to any small crustacean. But the mantis shrimp “doesn’t look anything like the shrimp you eat for dinner,” notes Sheila Patek. She is a marine biologist at the University of Massachusetts, Amherst.

Those impressive forelimbs that a mantis shrimp wields to kill prey grow from the sides of the animal’s mouth.

In some mantis shrimp, these limbs have a clublike bulge. It helps them crush hard prey, such as snails. Scientists have nicknamed these mantis shrimp “smashers.” Another type pierces fish or other soft animals using spines on the ends of their specialized limbs. Those animals are called “spearers.”

Smashers strike amazingly fast. Caldwell and Patek wanted to learn how fast. But the mantis shrimp’s limbs move so quickly that a normal video camera couldn’t capture any detail. So the researchers used a high-speed video camera to film the animal at up to 100,000 frames per second.

This showed mantis shrimp could swing their clubs at speeds of 50 to 83 kilometers (31 to 52 miles) per hour. At the time of the discovery, this was the fastest known strike of any animal. (Scientists have since found insects that strike faster. But these bugs move through air, which is easier to move through than water.)

Mantis shrimp can strike quickly because parts of each specialized limb act like a spring and latch. One muscle compresses the spring while a second muscle holds the latch in place. When ready, a third muscle releases the latch.

Even more amazing, mantis shrimp strike so quickly that they set the surrounding water boiling. This produces destructive bubbles that quickly collapse, the video showed. As the bubbles collapse, they release energy. This process is called cavitation.

While you might think of bubbles as harmless, cavitation can cause serious damage. It can destroy ship propellers, pumps and turbines. With mantis shrimp, researchers think cavitation helps them break apart prey, including snails.

Mantis shrimp boast an especially unusual vision system. It is far more complicated than in humans and other animals.

People, for instance, rely on three types of cells to detect color. The mantis shrimp? Its eyes have 16 specialized types of cells. Some of those detect colors people can’t even see, such as ultraviolet light.

Molecules called receptors serve as the heart of the specialized eye cells. Each receptor excels at absorbing one region of the light spectrum. One may stand out in detecting green, for example, while another outshines the others at seeing blue.

Most of the mantis shrimp’s eye receptors aren’t good at absorbing red, orange or yellow. So in front of some receptors, these animals have chemicals that act as filters. Filters block entry by some colors while letting other colors through to the receptor. For example, a yellow filter will let yellow light through. Such a filter boosts a mantis shrimp’s ability to see that color.

Tom Cronin wanted to find out more about how these animals see. Cronin is a vision scientist at the University of Maryland, Baltimore County. So he, Caldwell and a colleague collected mantis shrimp off the coast of Australia to study in the lab. All of the animals belonged to the same species, Haptosquilla trispinosa. The scientists collected them from communities found at a range of different depths. Some were living in fairly shallow water; others were dwelling at depths of about 15 meters.

To Cronin’s surprise, the eyes of animals living in deep water had different filters than did eyes of mantis shrimp in shallow water. Deep-water dwellers had just as many filters, but none was red. Instead, their filters were mostly yellow, orange or yellowish-orange.

That makes sense, Cronin says, because water blocks out red light. So for a mantis shrimp living 15 meters underwater, a receptor that can see red wouldn’t help much. Far more useful are filters that help an animal tell apart different shades of yellow and orange — colors that do penetrate the depths.

But were deep- and shallow-water mantis shrimp born with different types of filters? Or could they develop them, depending on where they lived? To find out, Cronin’s team raised some young mantis shrimp in light that included red, similar to the light in shallow-water environments. They allowed other mantis shrimp to mature in bluish light, typical of deeper water.

Rumbles in the deep

Mantis shrimp aren’t just a sight to see — they are also something to hear.

Patek found this out after she placed mantis shrimp into tanks in her laboratory. Then she installed underwater microphones near the animals. At first, the mantis shrimp seemed fairly quiet. But one day, Patek put on headphones connected to the microphones and heard a low roar. She recalls, “It was an amazing moment.” She was left wondering: “What in the world am I listening to?”

As Patek analyzed the sounds, she realized they resembled the low rumblings of elephants. The mantis shrimp’s version is much quieter, of course, but just as deep. Patek had needed a microphone to detect the sounds because the tank’s walls had blocked the sound. But divers would be able to hear them underwater, she says.

Watching videos of the mantis shrimp, Patek concluded that the animals made the noises by vibrating muscles on the sides of their bodies. “It seems impossible that this is happening — that this small creature is producing a roar like an elephant,” she says.

Later, Patek’s team recorded the sounds of wild mantis shrimp in burrows near Santa Catalina Island, off the Southern California coast. The animals proved noisiest in the mornings and early evenings. Sometimes multiple mantis shrimp rumbled together in a “chorus.” Patek isn’t sure what message they’re trying to send. Maybe they’re trying to attract mates or announce their territory to rival mantis shrimp.

The sights and sounds that mantis shrimp produce aren’t the only reasons they attract so much attention. David Kisailus, a materials scientist at the University of California, Riverside, looks to these animals for inspiration. As a materials scientist, he’s developing materials to make better armor and cars. These new materials must be strong yet lightweight.

Kisailus knew mantis shrimp can smash shells with their clublike weapon. “We just didn’t know what it was made of.”

So he and his colleagues dissected mantis shrimp clubs. Then the researchers examined them using a powerful microscope and X-rays. They discovered that the club contains three main parts. An outer region is made from a mineral containing calcium and phosphorus; it’s called hydroxyapatite. The same mineral imparts strength to human bones and teeth. In mantis shrimp, this mineral’s atoms line up in a regular pattern that contributes to the club’s strength.

Inside the club’s structure are fibers made from sugar molecules with a calcium-based mineral between them. The sugars are arranged in a flattened spiral, a pattern called a helicoid. Layers of fibers are stacked one atop the other. But no layer lines up perfectly with the one below, making the structures lightly crooked. This portion of the club acts as a shock absorber. It keeps cracks from spreading through the club when the animal hits something hard.

Finally, the team discovered that more sugar fibers wrap around the club’s sides. Kisailus compares these fibers to the tape that boxers wrap around their hands. Without the tape, the boxer’s hand would expand when striking an opponent. That could cause an injury. In mantis shrimp, the sugar fibers play the same role. They keep the club from expanding and fracturing on impact.

Kisailus’ team has built fiberglass structures that mimic the helicoid pattern in the mantis shrimp’s club. In the California desert, the researchers shot the material with a gun. It was bulletproof. The team now seeks to make a lighter-weight version.

Like Caldwell, Kisailus learned the hard way to treat mantis shrimp with respect. Once, he decided to see if he could experience the animal’s legendary smash, while taking precautions to limit the pain. “I thought, maybe with five pairs of rubber gloves, I’ll feel it but not get hurt,” he says. But no — “It hurt a lot.”

Here a mantis shrimp stares down a camera with its unusual eyes. Credit: Roy Caldwell

cavitation The formation and quick collapse of bubbles in a liquid, caused by mechanical force.

crustacean A group of animals that includes crabs, lobsters and shrimp.

fiberglass A material made of glass strands.

mantis shrimp A marine animal related to crabs and lobsters. Mantis shrimp use armlike body parts to kill prey. They are often multicolored and have a very complex vision system.

materials scientist A researcher who studies the structures and properties of materials. Materials are the substances from which things are made, such as wood, plastic or glass.

prey An animal that other animals hunt and eat.

receptor In eye cells, a molecule that absorbs light.

tune Adjust to the right level.

ultraviolet A type of light that is close to violet but invisible to the human eye. 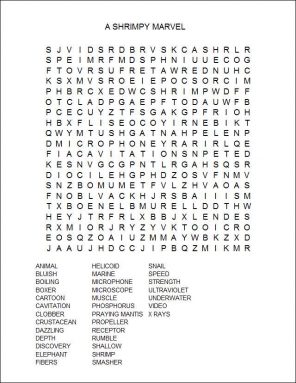