This article is one of a series of Experiments meant to teach students about how science is done, from generating a hypothesis to designing an experiment to analyzing the results with statistics. You can repeat the steps here and compare your results — or use this as inspiration to design your own experiment.

You can measure the width of a single hair. All you need is a dark room, a laser pointer, some cardboard, tape and a little bit of math. And, of course, someone’s hair.

Using a useful video with instructions from the Frostbite Theatre YouTube series at the Department of Energy’s Jefferson Lab in Newport News, Va., I decided to see if I could measure the hairs of some of the writers here at the Science News office. I took samples from willing volunteers. Then I measured how they scattered the light from a laser pointer with the help of fellow writer Chris Crockett. Here is how you can do it too:

1.       Make a frame that can hold your hair. I cut a square of cardboard about 15 centimeters (roughly six inches) wide, and then cut a small rectangle inside it. My inside cutout was about one centimeter (0.39 inches) wide and four centimeters (1.5 inches) tall.

2.       Take a human hair, maybe from your own head, or from a willing volunteer. Make sure it is long enough to tape at both ends of your inside rectangle. In my case, each hair had to be at least 5 centimeters long to make sure I could tape it at both ends.

3.       Tape the hair, as tight as you can, at the top and bottom of your frame, so that the hair runs through the middle of the inside cutout.

4.       In a dark room, stand more than a meter (more than three feet) away from a blank wall. Hold up the frame with your hair, and shine a laser pointer at the wall from just behind the hair, making sure it hits the hair along the way.

5.       You will see the light scatter to the sides as you hit the hair with your laser pointer.

The hair is causing the laser’s light to diffract.  Diffraction is the bending that takes place when a wave of light encounters an object, such as a human hair or a slit in a piece of paper. Light can act as a wave, and when it encounters the hair it splits into a regular pattern of lines. It will create a scatter pattern you can see on the wall. The size of the pattern from this diffraction is related to the size of the object that caused the scatter. This means that by measuring the size of your light scatter, you can — with a little math — figure out the width of your hair.

6.       Measure the distance from your hair to the wall where you are shining your pointer. It’s best to measure this in centimeters.

8.       Measure the light scatter on the wall. You want to measure the line from the center of the dot to the first major “dark” section. Also measure this in centimeters. It’s usually best to have a buddy, one person to hold the laser pointer and hair, the other to measure the pattern.

Now, you have all you need to figure out how thick your hair is. It will help to make sure that all of your numbers are in the same units. I converted all of my numbers to centimeters. My numbers looked like this:

Then, I put the numbers into the equation provided in the video:

is the diameter of your hair.

is the minimum gap distance that is measured on the scatter. Since I measured to the first dark gap, m is one. The 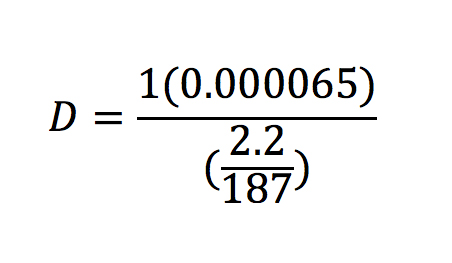 And D = 0.005831 centimeters or 58 micrometers. Human hair widths are generally between 17 and 180 micrometers, and the hairs from Science News fall nicely into that distribution, though they appear to be a bit thinner than average.

Try it yourself! What diameter did you get? Post your answers in the comments.

diffraction  The bending of waves when they hit an object. The pattern produced by waves when they bend can be used to determine the structure of very tiny objects, such as the width of a human hair.

laser  A device that generates an intense beam of coherent light of a single color. Lasers are used in drilling and cutting, alignment and guidance, and in surgery.

wavelength  The distance between one peak and the next in a series of waves, or the distance between one trough and the next. Visible light — which, like all electromagnetic radiation, travels in waves — includes wavelengths between about 380 nanometers (violet) and about 740 nanometers (red). Radiation with wavelengths shorter than visible light includes gamma rays, X-rays and ultraviolet light. Longer-wavelength radiation includes infrared light, microwaves and radio waves.