CHICAGO — Earth is getting warmer. Since 1880, when scientists began collecting accurate global measurements, the average temperature across our planet has risen about 0.85° Celsius (1.53° Fahrenheit). Careful, though: The figure is just an average. Some areas have gotten even warmer during that time. One of those areas is the Arctic.

Normally we associate the far north with extreme cold. However, Arctic temperatures have risen about twice as much as the global average since 1880. That abnormal rate of warming is shaking things up at the North Pole. It also may be causing problems much farther south, in more populated regions that are important for farming, scientists say.

These experts believe that changes in the Arctic may explain some of the weird weather affecting the mid-latitude regions. These are the areas that lie midway between Earth’s tropical and polar regions. They are home to most of the people on Earth. They also produce most of Earth’s wheat, corn, rice and other crops.

In the Northern Hemisphere, this region includes Europe, North America and most of Asia. The processes linking Arctic changes with the weather across this broad region are complicated, scientists say. Still, evidence suggests many worrisome changes are underway.

In fact, experts warn that changes in the Arctic soon could be felt in homes around the world. That is because the effect of those changes on weather patterns could lead to big troubles for farmers and ranchers, new research suggests. Many of their crops won’t be as plentiful. Plus, the prices for things such as meat, eggs and milk will be much less predictable — and possibly much higher.

“Even though it might seem otherwise, the Arctic is not a faraway place,” says Mark Serreze. He’s an environmental scientist and the director of the National Snow and Ice Data Center (NSIDC) in Boulder, Colo. “What happens there does affect us in the mid-latitudes.”

Serreze and other experts met February 15 to discuss the wide-ranging effects of climate change in the Arctic. Their discussion took place here at the annual meeting of the American Association for the Advancement of Science, or AAAS.

The lid comes off

The first step in the chain of events leading to weird weather across North America, Europe and other mid-latitude regions is the loss of Arctic sea ice. (Unlike the Antarctic, which is a continent, the Arctic contains an ocean.)

As of September 2012, ice covered about 3.41 million square kilometers (1.32 million square miles) of the Arctic Ocean. That’s about twice the size of the state of Alaska. This may sound like a lot of ice. However, it was a record low — at least since satellites started measuring the sea ice in 1979. In September 1980, notes Serreze, sea ice covered more than twice as much of the Arctic Ocean.

Many factors influence how big an area the Arctic sea ice covers. Warmer air temperatures certainly play a role. Some researchers have suggested that changes in winds and ocean currents also affect the extent of the ice. Recently, other experts have noted that the rivers flowing into the Arctic Ocean are carrying much more warm water than they did a few decades ago. That has an effect on the ice cover too. And open water is darker than ice. So when ice disappears, the surface waters can absorb more solar energy. That, in turn, warms up the Arctic even more.

It is difficult to pinpoint any one reason for the loss of Arctic sea ice. Regardless, the overall effect is dramatic.

“Getting rid of Arctic sea ice is like removing a big lid between the warm ocean and the cold air above it,” says Serreze. (Even though surface waters of the Arctic Ocean are near freezing, the air above the intact ice is often much colder, especially in winter months.)

When that lid comes off, the ocean’s heat can more easily escape into the air, says Jennifer Francis. She’s an atmospheric scientist at Rutgers University in New Brunswick, N.J. That’s the second step in the chain leading to weird weather: When the air gets warmer, it expands. Since 2000, scientists have noted that the lower half of the atmosphere (where weather happens) has grown more than 1 kilometer (0.6 miles) thicker over the Arctic, Francis reported at the AAAS meeting.

As the atmosphere over the Arctic thickens, it slows the overall flow of air from the tropics to the North Pole. That, in turn, leads to the third step in the weather-making process: When airflow toward the North Pole slows down, a high-altitude river of wind that flows from west to east also slows. That river is often called the jet stream.

When the jet stream slows as it circles the North Pole, it behaves like a real river. Usually it flows relatively straight. But it will start to wander back and forth, or meander, as it slows. That’s the fourth step in the parade toward weird weather. When the jet stream gets wavier, its wiggles become larger. They also extend farther north and south than normal.

Those unusually big wiggles affected weather this past winter, says Francis. One after another, cold air masses — each one a so-called “polar vortex” — meandered south to chill the lower 48 U.S. states. Elsewhere, at the same time, warm air masses marched northward. That movement made for exceptionally warm winters in Alaska and Sweden, Francis notes.

What once might have been two days of warm, sunny weather can drag on into an extended dry spell, says Francis. At the other extreme, what once might have been a short spate of rain could turn into a week of drenching downpours. That in turn increases the risk of floods. In short, weather tends to become more persistent. While it may be more predictable in the short term, it also can become more variable from year to year. And that’s a problem.

Farming requires a predictable climate. Farmers need to anticipate when the weather will grow warmer or turn colder, how much rain will fall and how long the growing season will last. That helps them decide what crops to plant and when to plant them. When climate remains consistent from one year to the next, farming is much less risky and harvests tend to be bigger.

Unfortunately, the changes in the Arctic are introducing new risks to farming across the Northern Hemisphere. The region is often called the world’s breadbasket. That is because it produces so much wheat and other vital crops that are eaten globally.

Recently, the weather across this broad region has become more chaotic, says Jerry Hatfield. He works for the U.S. Department of Agriculture in Ames, Iowa. As an agricultural climatologist, Hatfield studies how climate and weather affects farmers and ranchers. “When the weather is more chaotic, it’s difficult for farmers to plan,” he explained at the AAAS meeting.

One recent example: A massive storm system dumped huge amounts of rain throughout the southern and eastern United States in late April 2014. Many regions saw 30 centimeters (12 inches) of rain. The deluge dropped more rain on Pensacola, Fla., in two days than Los Angeles has logged throughout the entire past 2 years (40 centimeters), the Associated Press reported. Although farmers need rain, this was too much at once to be helpful. In fact, the resulting floods can waterlog fields, damaging crops. Meanwhile, California — whose farmers produce huge amounts of U.S. fruits and vegetables — is suffering a prolonged drought.

Increasingly unpredictable weather has become a worldwide problem, Hatfield says. In India, for example, long-term shifts in weather patterns have left farmers struggling to meet the demand for food. Because India’s population of 1.2 billion continues to grow, in coming years that nation might not be able to produce all the food it needs, Hatfield says. In other words, India will need to start importing food. Unfortunately, there might not be enough surplus food for it to buy at affordable prices.

That is because the world’s population is growing outside India, too. There are more than 7.1 billion people on Earth right now. As that number rises even higher, it will take even more food to keep everyone fed. That will make everyone more dependent on a stable food supply, says Hatfield.

Based on expected temperature changes alone, harvests are expected to decline, Hatfield says. Studies suggest substantial effects on the U.S. harvests of a variety of crops in coming years. For example, experts forecast that by 2050, harvests of corn, rice, peanut and other crops will drop by 4 to 12 percent. The United States is a major producer of these crops. Any drop in its production can therefore affect the price and availability of these foods worldwide.

Many farmers already are feeling the effects of weird weather. Crop insurance payouts for poor harvests set records in 2011 and 2012, according to Iowa farmer Matt Russell. He’s also a State Food Policy Project coordinator at Drake University in Des Moines, Iowa. “We’re getting the wrong weather at the wrong time,” he says in a May 4 story in The Gazette newspaper in Cedar Rapids, Iowa. His state’s croplands are a major part of the U.S. breadbasket. And last year, they experienced the wettest May on record, one of the coldest Julys and one of the driest Augusts, he told the newspaper.

But these aren’t just problems for farmers in Iowa or other parts of the United States. “Everybody’s going to be affected by this,” Hatfield says. “People don’t really appreciate all the things that can be disrupted” by climate change. And the impacts will be felt globally.

Now add in the unpredictability caused by climate shenanigans that get their start in the Arctic, these scientists say, and disruptions to daily life could become far more severe than had been expected.

air masses   Large volumes of air, sometimes covering many hundreds or thousands of square kilometers (square miles), that typically have a consistent temperature or water-vapor content. Air masses are often classified by their source, such as continental, arctic or tropical. Air masses and other weather systems are steered across Earth’s surface by jet streams and by differences in atmospheric pressure.

breadbasket      A colloquial term for a region where many cereal grains — corn, rye, wheat and sorghum — are grown.

climate  The weather conditions prevailing in an area in general or over a long period.

climate change  Long-term, significant change in the climate of Earth. It can happen naturally or in response to human activities, including the burning of fossil fuels and clearing of forests.

climatology   The study of weather conditions prevailing in an area in general or over a long period. Scientists who work in this field are called climatologists.

jet stream  A fast-flowing, high-altitude air current. On Earth, the major jet streams flow from west to east in the mid-latitude regions of the Northern and Southern Hemispheres.

mid-latitudes     That part of the globe that lies midway between Earth’s tropical and polar regions. Most people live in these temperate regions and most of the world’s food is produced here.

polar vortex       A semi-permanent weather system involving a large air mass in Earth’s upper atmosphere. It consists of an area of low atmospheric pressure. In the Northern Hemisphere, this tends to center near Canada’s Baffin Island and over northeast Siberia. Winter strengthens the vortex, because that’s when the temperature difference between the poles and mid-latitudes is greatest.

weather  Conditions in the atmosphere at a localized place and a particular time. It is usually described in terms of particular features, such as air pressure, humidity, moisture, any precipitation (rain, snow or ice), temperature and wind speed. Weather constitutes the actual conditions that occur at any time and place. It’s different from climate, which is a description of the conditions that tend to occur in some general region during a particular month or season. 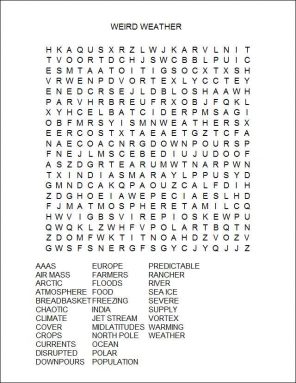 More Stories from Science News for Students on Climate