Without bones, your body would be a slippery bag of organs. But the stiff models of a skeleton that you’ve seen in science class (or as Halloween decorations) tell only half the story. That’s because “the skeleton does more than just hold you up,” explains Laura Tosi Bones are made of living, breathing cells. And they play all sorts of important roles, says Tosi, who directs the Bone Health Program at Children’s National Medical Center in Washington, D.C.

And that’s just for starters. Researchers have been finding that bones “chat” with other body parts in surprising ways. As scientists uncover the skeleton’s secrets, they’re finding clues that may help them cure disease and even grow replacement bones.

The framework that gives your body shape is surprisingly busy. “Bone is a very dynamic organ,” notes Mark Johnson. He’s a biochemist at the University of Missouri-Kansas City.

The body’s skeleton changes constantly. In a process called remodeling, old bone breaks down so that new bone can take its place. During childhood, that process allows bones to grow and change shape. In adults, remodeling helps repair damage and prevent bones from becoming brittle.

Through childhood and early adulthood, the body makes more new bone than it takes away. This means the mass — or amount of bone — increases. Obviously, it’s hard to measure bone mass with the rest of the body’s tissues in the way. So doctors estimate bone strength by measuring the density of hard mineral packed into a segment of bone. The greater the bone density, the stronger the skeleton.

To build more bone, cells require certain building blocks. An especially crucial one: calcium. Strong bones depend on this mineral, found in dairy products and many veggies. Bones also serve as the body’s storehouse of calcium, which is used in plenty of places. For instance, calcium drives the chemical reaction that allows the heart to beat. When diet doesn’t deliver enough calcium, the body will steal the mineral from the skeleton. That can weaken bones.

It’s also hard to have healthy bones without enough vitamin D. It helps the body absorb calcium. But many people have too little vitamin D. As a result, their bones can become thin and misshaped.

When it comes to building bone, though, “exercise is the most important thing,” Tosi told Science News for Students. Weight-bearing exercises such as walking, running, jumping and lifting weights are great for boosting bone mass. Exercise makes such a difference, in fact, that professional tennis players actually have stronger bones in the arm they use to swing their racket.

Conversations between bone and muscle

But paving over tiny bits of damage explains only part of exercise’s benefit to bone. Over the last few years, Johnson’s team has shown the route to stronger bones is far more complex. Scientists used to look at only bones for the answers, he said. As it turns out, though, muscles also have something to say about bone behavior.

Johnson’s team, as well as scientists in other labs, have discovered signaling — a type of chemical chattering — that goes on between the two types of tissue. Bones appear to send signals that affect the way the muscles work. Muscles, in turn, send signals that alter how bone cells work.

Muscles make molecules that influence the actions of osteocytes — the conductors — Johnson’s team has found. (A molecule is a group of atoms held together by chemical bonds. Molecules make up everything, from cells in the body and building blocks of plastics to the gases in Earth’s atmosphere.)

Johnson suspects that muscles make many molecules that influence bones. He’s working to identify these and what messages they send to bones. If he succeeds, one day it may be possible to identify drugs or other treatments that crank up the volume on those messages. That might provide doctors a way to direct those osteoblasts to make more new bone, for example. That could strengthen the entire skeleton.

Such treatments might help strengthen weak and brittle bones. Called osteoporosis, this condition affects many older people and can lead to bones that break easily.

But this research might also help younger people who have diseases that weaken or damage bones. One example is brittle bone disease. As the name implies, people born with this disorder have delicate bones that break easily. Right now, no cure exists.

Building bone outside the body

The ability to instruct the body to beef up its bones could help people with a number of skeletal disorders. But sometimes building new bones from scratch would be even better. Scientists at Columbia University in New York City are working to do just that.

One motivation is helping people with Treacher Collins Syndrome. This disease causes bones in the face to grow abnormally. People born with the syndrome tend to have tiny or missing cheekbones. This gives their faces a droopy look.

Doctors can replace these misshaped bones or add missing bone with surgery. It requires robbing bone from other parts of the body. Surgeons may slice out a chunk of hip bone, for example. After shaping it into something that resembles a cheekbone, they’ll implant it into the face.

This is not ideal, however. For one thing, it damages the hip. The borrowed bone also can be difficult to shape into a perfect cheek or jaw.

So the Columbia team is growing replacement bone in the lab. First, they create a scaffold, or frame, from cow bone that’s been stripped of its living cells. They carve the scaffold so that it’s shaped like a normal, healthy version of the bone they want to replace or add. Then they remove stem cells from the patient’s body.

What is a stem cell?

Stem cells are special in that they can mature into many different types of cells, including bone. The Columbia team harvests stem cells from fat extracted from the patient. They apply these cells to the scaffold and then feed them the nutrients they need to grow into bone cells. After a few weeks, surgeons implant the bony scaffold into a patient’s face.

There, new bone will continue to grow into the implant. Over time, the new bone will completely eat away the scaffold. Eventually, only the patient’s bone cells will remain, Sarindr Bhumiratana told Science News for Students. A biomedical engineer, he is one of the researchers at Columbia working on the bone-development project.

So far, these researchers have grown and implanted bones only into pigs. Soon, though, they’re planning to test this technique in people.

In the not-too-distant future, people with facial deformities might be able to get new jawbones or cheekbones built from scratch. “The science of the future is exciting,” Bhumiratana said, “and it’s going to be fun.”

Johnson, Bhumiratana and their colleagues are working to pry still more secrets from bones. They hope they can let those skeletons out of the closet soon.

biomedical engineer  An expert who uses science and math to find solutions to problems in biology and medicine. For example, they might create medical devices such as artificial knees or find new ways to produce tissues for use in the body.

bone mass  The weight of the skeleton.

bone mineral density  A measure of the amount of calcium and other minerals packed into a segment of bone.

brittle bone disease  A genetic disorder present from birth that causes weak, fragile bones; early hearing loss and short height. It is thought to affect 25,000 to 50,000 Americans. Symptoms can range from mild to potentially deadly.

calcium  A chemical element needed by most organisms to grow.

molecule  An electrically neutral group of atoms that represents the smallest possible amount of a chemical compound. Molecules can be made of single types of atoms or of different types. For example, the oxygen in the air is made of two oxygen atoms (O2), but water is made of two hydrogen atoms and one oxygen atom (H2O).

osteoclast  Cells that break down and remove old bone tissue.

osteocyte  The most common type of bone cell. It directs the actions of osteoblasts and osteoclasts.

stem cell  A “blank slate” cell that can give rise to other types of cells in the body. Stem cells play an important role in tissue regeneration and repair.

tissue  Any of the distinct types of material, comprised of cells, which make up animals, plants or fungi.

Treacher Collins Syndrome  A genetic disease that affects the development of bones and other tissues of the face. The syndrome affects an estimated one in every 50,000 people, causing facial deformities and, sometimes, hearing loss and cleft palate.

vitamin D  Called the sunshine vitamin, the skin makes this chemical upon exposure to certain ultraviolet wavelengths of sunlight. The form made in the skin isn’t active, but rather a precursor form that can be stored until needed in body fat. The active form of this vitamin is a hormone that helps bone take up calcium. The active form also plays a role in fighting many types of chronic disease, from muscle wasting and diabetes to certain types of cancer and gum disease. People who do not spend a lot of time outdoors or who wear sunscreen when they do may not make ideal amounts of vitamin D. Few foods are naturally rich in this vitamin either. So manufacturers fortify some commonly consumed foods, especially milk and some orange juice, with vitamin D. 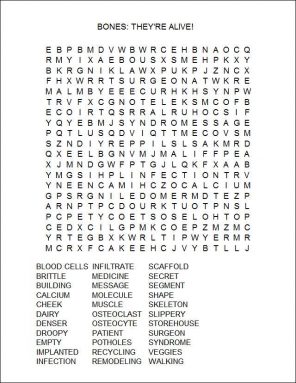