By Science News for Students 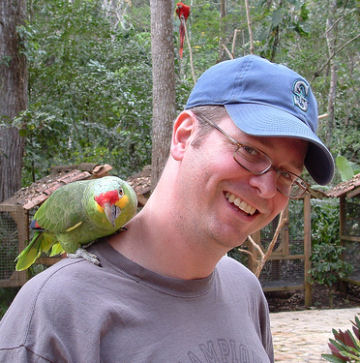 During a 3-month adventure through Central and South America, Bryn Nelson encountered a variety of exotic animals, including this friendly mealy parrot.

Aboard a boat named the Letty, I traveled more than 500 miles (about 800 km) through the Galápagos Islands and crossed the equator four times. During the trip, I kept a journal so I’d remember all the weird and wonderful wildlife I was seeing along the way. On several nights, I read a description of the same islands based on journal entries written in the 19th century.

From my readings, I learned that Galápagos tortoises, in particular, fascinated a young British naturalist named Charles Darwin. The creatures helped Darwin develop a groundbreaking theory of how species change over time. Now famous, the theory is called evolution.

After his visit in 1835, Darwin realized that distinct sets of wildlife lived on separate islands in the Galápagos. A different type of tortoise, for example, lived on each of many islands, and each type seemed well suited to the particular demands of its unique environment.

In his book The Voyage of the Beagle, Darwin wrote that people living in the Galápagos Islands could actually match a tortoise to its original island home on the basis of its size and the shape of its protective shell, also called a carapace.

Lonesome George, for example, has a “saddleback” shell that resembles a horse’s saddle. The shape of his shell allows his long neck to reach toward high-growing cactus leaves and other vegetation on his dry native island, Pinta.

Compared with other Galápagos tortoises, the 200-pound George is relatively small. Tortoises living on wetter islands with more abundant vegetation are much bulkier. Some weigh up to 650 pounds!

I saw some of these bigger tortoises up close on Santa Cruz Island, where the animals sport dome-shaped carapaces. After a half-hour bus ride to the island’s highlands, our tour group visited a private farm that provides access to a semiwild tortoise population.

The tortoises there roam freely. Local people help ensure the animals’ welfare by filling ponds with water for the tortoises to drink and cool off in.

Along a trail, we saw several of the dome-shelled giants soaking in shallow ponds. One was sharing its bath with a small duck. Others were walking slowly and munching on greenery.

As impressive as these adult reptiles were, I was just as excited to see baby tortoises no bigger than half a grapefruit. I couldn’t believe that these tiny hatchlings could grow into such enormous tortoises, but I was happy to see that researchers have given them a fighting chance of doing just that.

Conservationists have set up three tortoise-breeding facilities in the Galápagos Islands, and I was able to visit two of them. The first, at the Charles Darwin Research Station on Santa Cruz Island, houses hatchlings from at least four islands: Española, Santa Cruz, Pinzon, and Santiago.

The hatchlings all have numbers painted on their backs so researchers will know where to release them. All will go back to their native islands when they are big enough to survive on their own.

At the breeding facility on San Cristobal Island, adult tortoises live within a semiprotected environment. After every successful mating, workers collect the tennis ball–size tortoise eggs so the hatchlings can be raised in safety. Each of the creatures begins its life weighing less than one-fifth of a pound.

As they grow, young tortoises live within long wooden holding pens that are covered by double rows of wire mesh to keep out hungry black rats. The first hatchling raised at the facility, named Genesis, is now about 3 years old.

Since her birth, Genesis has been joined by ten 2-year-old tortoises and by two hatchlings that were only 3 months old when I saw them. Each was no bigger than half a plum!

When they turn 5 years old, and their carapaces are about 8 inches wide, the hatchlings will be released back into the wild. At that size, they are relatively safe from rats and other predators, such as the Galápagos hawk.

Tortoises released this way, our guides told us, survive about 80 percent of the time. Without a helping hand, the survival rate would be much lower.

No one knows how long a Galápagos tortoise can live in the wild, but researchers believe a 200-year life span is possible. So with a little help, perhaps a tortoise born this year may inspire a naturalist who comes to visit sometime in the year 2207.—Bryn Nelson