March 27, 1964, was a quiet day in Alaska. Yet as dusk approached on this Good Friday, just two days before Easter, a major upheaval was in store. At 5:36 p.m., the ground began shaking violently. Alaskans are familiar with earthquakes. Indeed, the state averages some 60 each day — about 22,000 a year. But this was no ordinary tremor. This was the Big One.

In Anchorage, roads buckled and sank. Houses pulled apart. Railroad tracks warped. In Valdez, the ground beneath the harbor slumped — and nearly swallowed a ship docked there.

Most earthquakes rattle the ground for just seconds. Maybe even for a half or full minute. But 50 years ago, that now infamous Alaska quake shook steadily and terrifyingly for almost five solid minutes.

“It was so large that it caused the entire Earth to ring like a bell,” observes seismologist Tom Brocher and his colleagues from the U.S. Geological Survey (USGS) in a recent publication.

Then, as Alaska’s shaking ceased, things got worse — much worse.

The earthquake had uplifted large sections of seafloor. That movement generated huge and fast-moving waves in the open ocean, called tsunamis. In bays and inlets, the quake also triggered underwater landslides. These unleashed more tsunamis.

Explainer: Telling a tsunami from a seiche

Together, these destructive waves swept Alaska’s coastline with devastating speed and power. In places, the waves towered as high as a 20-story building. They washed away everything in their immediate path — buildings, docks and people.

No Alaskan who survived would ever forget this day. By midnight, 131 people were dead. Most had been killed by the tsunami waves that raked not just the coast of Alaska, but Oregon and California too. Indeed, like ripples in a pond, a tsunami travels outward in all directions.

Quake effects were felt in nearly every state.In Washington, Seattle’s Space Needle swayed like a tree in the wind. Lakes sloshed back and forth in Texas. Similar sloshing swamped fishing boats in Louisiana.

Now, a full half-century after Alaska’s gigantic quake, geologists are still feeling its effects. The reason: This quake opened a new era in geology. And it has forever changed what scientists understand about the constant remodeling of Earth’s surface.

In 1964, plate tectonics still was just an emerging — if unproven — concept. It held that Earth’s uppermost layer, called the lithosphere, is broken into enormous pieces. Each giant slab was expected to be moving slowly.

Like a jigsaw puzzle, Earth’s lithosphere is divided into interlocking pieces, called plates. (The lithosphere is Earth’s outer solid layer. It includes the crust and uppermost mantle.) Depending on how you count them, there are about 12 main tectonic plates, and numerous smaller ones. Their thickness ranges from 80 to 200 kilometers (50 to 124 miles). Plates beneath the oceans are much thinner than those under continents. These tectonic plates move gradually, bumping and grinding against each other.

As Alaska’s state seismologist, Mike West studies earthquakes. It was only after the 1964 quake, he says, that scientists could definitively point to the effects plate movements on Earth’s surface. “Before the 1964 quake,” he recalls, “you could look at features and say ‘Yes, these could be explained by plate tectonics. But they could also be explained by other things.’” Back then, he points out: “There was no smoking gun yet.”

Scientists now classify the bumping and grinding between plates in three different ways. Along convergent boundaries, neighboring plates either collide head-on or a denser ocean plate dives beneath a lighter continental plate. Along other, divergent boundaries, plates move away from each other. At still others, known as transform boundaries, plates slide past each other. The friction between these massive plates means they don’t move fast. Some start and then stop, only to start again much later.

Earth definitely moved with a start during the 1964 quake. But it took some geological sleuthing to determine how and why.

Geologist George Plafker worked for the USGS near San Francisco, Calif. He and two of his colleagues flew up, landing at an Air Force base outside Anchorage, Alaska, just a day after the main shaking stopped. Their mission: Figure out what had just happened.

They knew earthquakes develop when shifts occur along underground fractures, called faults. They still had many questions to answer. One was figuring out why some parts of Alaska had risen as much as 11.5 meters (38 feet), while the ground at other sites had dropped, or subsided. They also sought to locate the quake’s epicenter. The epicenter is that X-marks-the-spot site where the tremors commenced.

Plafker’s team mapped all the changes triggered by the quake that they could find. They were scouting for patterns. In particular, “We were looking for evidence of surface faulting,” he recalled at a press briefing earlier this week. Lucky for this team, 70 new seismographs (SIZE moh grafs) had recently been installed all over the world. These instruments detect and record earthquakes. By recording the size, direction and arrival times of the different seismic waves from a quake, seismographs help pinpoint its size and epicenter.

“It was the first global seismic network,” West tells Science News for Students. “So this was the first earthquake to be recorded around the world.” In the days and weeks that followed, dozens of smaller earthquakes continued to rattle Alaska. The seismographs recorded these aftershocks as well. Those instruments also helped identify the shape of the fault responsible for all the shaking.

Plafker studied all of these data. Eventually he arrived at a very important conclusion. The fault was not vertical. It wasn’t a break cutting straight down through deep rock, as many geologists had assumed. Like a descending ramp, the fault instead sloped at an angle, deep beneath Alaska.

Scientists next had to fit this finding to their understanding of plate tectonics. It turned out that the ramp’s shape was very, very significant. Plafker had confirmed that the earthquake occurred in a subduction zone. That’s a type of convergent plate boundary where one plate dives beneath another.

“George’s interpretation of this as a subduction zone was a real key,” says Gary Fuis. He’s a geophysicist with the USGS who recently co-authored a study looking back at the 1964 earthquake. Explains Fuis: “This was some of the first clear evidence that plate tectonics was right.”

The dynamics of a subduction zone explained why the 1964 earthquake was so massive. Tectonic plates constantly push against each other. They tend to subtly creep along. When a fault actually slips, the motion is both sudden and exaggerated. It’s like opening a sticky window or door. You push and push. Then suddenly, it pops open.

On a gigantic scale, that’s what happened in Alaska. The Pacific Plate had been creeping north about 6 centimeters (2.5 inches) per year. Then, all at once, the Pacific Plate thrust forward. It slipped as much as 18 meters (60 feet) under the North American plate, the geologists learned.

That motion was “huge,” West says. East to west, nearly 960 kilometers (600 miles) of fault had ruptured at once.

Natasha Ruppert at the Alaska Earthquake Center in Fairbanks is another seismologist. She now estimates that it takes at least 500 years of plate motion to set the stage for such big earthquakes.

The land that was uplifted — and sometimes dropped — by the Great Alaskan Quake also fits with the plate-tectonics model. As convergent plates collide, the overriding — or top — plate gets slowly pushed up. It’s a bit like a rug wrinkling. When the fault finally slips, it’s like a rug flattening out. Also just like a rug, the land spreads out as it flattens.

In Alaska, the flattening caused some of the affected land to drop. And it moved parts of the Alaskan coast 15 meters (50 feet) toward the sea. Meanwhile, land near the coast just above the fault rose when the fault slipped. This pattern has since been seen at other subduction zones.

But Plafker saw it first, there in Alaska.

Geologists call plate tectonics a “unifying theory.” That’s because it explains practically everything about Earth’s crust. It explains how the continents and oceans have been shaped, and why there are earthquakes, mountains, volcanoes and tsunamis.

Naturally, most of the action occurs along the edges of tectonic plate. That is where the plates push into, against or away from each other. Imagine traveling from New Zealand clockwise around the rim of the Pacific Ocean, all the way to the tip of South America. The route is dotted by some serious volcanoes and wracked by violent earthquakes. It should come as no surprise that this perimeter has been nicknamed the “Ring of Fire.”

The Ring of Fire also marks the edge of the Pacific Plate. In Alaska, that plate dives under the North American Plate. This motion causes earthquakes. In fact, West notes, four out of every five U.S. quakes occurs in this northernmost state. Pacific Plate motion also creates volcanoes as rock melted by the sinking plate rises to the surface. In Alaska, more than 50 volcanoes have erupted over the last 250 years.

Farther to the south, the Pacific Plate slides past the North American Plate. There, in California, that motion causes earthquakes along the infamous San Andreas Fault. 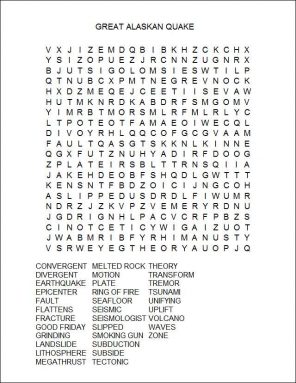