One spring morning, a 19th-century French scientist named Jean-Henri Fabre sat at home and watched as a female emperor moth emerged from her cocoon. He placed the moth in a gauzy cage, just to see what might happen next. He didn’t have to wait long: That evening, dozens of male emperor moths swarmed into his house through an open window. “It was an invasion,” Fabre later wrote, calling it “unforgettable.”

Many of the moths appeared to rush the cage containing the female. What could possibly attract them? Fabre began experimenting. If he placed a female moth anywhere that wasn’t tightly sealed — say, inside a cupboard or drawer — the males found her. But if he placed her in a sealed box or glass jar, the males ignored his house.

Fabre quickly ruled out that the female moth had attracted the males from afar with sight or sound. That indicated it must be smell. If she was releasing some sort of chemical lure, what was it?

Scientists had suspected the existence of such mate attractants. Yet it took almost another century, until 1959, for German scientist Adolf Butenandt to identify the first one. For 20 years, Butenandt and his team had been seeking the scent that female silk moths emitted to lure males. By extracting chemicals from hundreds of thousands of moths, they eventually discovered the chemical. They called it bombykol (BOM bee kall).

After Butenandt’s discovery, scientists started finding more and more of the chemicals we now call pheromones (FAIR oh moanz). These chemicals, or mixes of chemicals, work as messengers between individuals. They can make other members of the same species change how they behave or how they mature.

Ants, for example, lay down pheromones as they walk back to their nest after a meal. These scented trails signal “good eats” to other ants in the colony. Meanwhile, a different pheromone might tell wanderers to turn back, because there’s no food ahead.

Aphids too release pheromones. In their case, it’s when attacked by predators. Their chemical messages tell nearby aphids to drop off a leaf and flee. And many, many other critters, from lobsters to elephants, emit pheromones as if they were perfume — a perfume that members of the opposite sex find irresistible.

“Almost every animal you can think of uses pheromones,” says Tristram Wyatt, a zoologist at the University of Oxford in England.

Scientists are still learning about these chemical messages, including how several species sometimes copy those pheromones for devious purposes. For example, some researchers have identified plants that mimic insect pheromones to attract the bugs. Not surprisingly, people also have learned to harness pheromones to deceive destructive pests — sometimes luring bugs to their deaths.

Still unknown: whether people release pheromones — and how others might respond to such secret chemical signals.

Although research on pheromones has focused on insects, scientists have found plenty of other animals that depend on these chemical signals. One group of animals that experts largely overlooked was cephalopods (SEFF oh lo POHDZ). This ocean-dwelling class of animals includes squids and octopuses. Since cephalopods tend to have big eyes, many scientists assumed vision provided most of the information these animals gathered about their environment. Until, that is, marine biologist Roger Hanlon and his colleagues encountered some strange behavior in squid.

These scientists are from the Marine Biological Laboratory in Woods Hole, Mass. While swimming off the coast of Cape Cod, they encountered mop-shaped piles of fertilized eggs on the ocean floor. The eggs had been left by female longfin inshore squid. Hanlon’s team witnessed male squid hanging around, too, doing something odd.

“Males were going over there and sticking their arms down into the egg mops,” recalls Hanlon. At the time, he says, “That made no sense.”

Curious, his team collected some males, placed them in a tank back in their laboratory and then added in some eggs. Again, the males swam to the eggs and touched them. But that wasn’t all. After the males touched the eggs, they began hitting each other with their fins. The squid even chased and tackled one another.

Hanlon realized some chemical in the egg pile likely triggered this aggression. It must be something males could detect with their arms. His team started extracting chemicals from female squid and their eggs. By testing how male squid responded to various extracts, the scientists narrowed down the pheromone to one particular molecule.

To make sure they had the right one, the researchers made a synthetic version of the chemical. Then they placed a glass flask containing squid eggs into a tank with male squid. The male squid could both see the eggs and touch the flask, but couldn’t make direct contact with the eggs. Nor did the males fight much. Next, the scientists coated the outside of another egg-containing flask with the synthetic chemical and placed it into the tank.

Now, when male squid touched the glass “they came out fighting,” says Hanlon. That experiment told his team that they’d found the right molecule. He suspects that male squid evolved to detect this chemical so they could be become more effective in fighting off competitors. But why fight over fertilized eggs? The chemical in the egg mops likely signals to male squid that more females are nearby and ready for mating.

Pheromones initially evolved in animals to help them survive. Some plants evolved to take advantage of those pheromones and trick animals. One such plant is a white and red orchid that grows only on one island in China.

To reproduce, blooms must spread their pollen to other flowers of the same species. Many plants rely on insects for help. An insect lands on a flower, often seeking nectar (and sometimes pollen) for food. As the insect alights, some pollen grains may stick to its body. Later, when the bug lands on another flower, pollen can rub off and fertilize that flower.

In China, researchers noticed that hornets would visit the red and white orchids, spreading their pollen. But these insects hadn’t come by to snack. Instead, the hornets pounced on the orchids, as if attacking them. Stranger yet, the orchids offered no nectar. Nor did the hornets bring home any pollen to feed their young, which eat only honeybees and other insects. Essentially, the hornets would make repeated visits to an attractive pantry, only to find it empty.

Maybe the orchids were releasing a lure the hornets couldn’t resist. That was the idea, anyway, of Manfred Ayasse, a scientist at the University of Ulm in Germany, and Jennifer Brodmann, one of his colleagues.

Next, the researchers tried to isolate the molecule responsible. They took an antenna from a hornet and blew different orchid chemicals over it. An electrical signal alerted the scientists whenever an antenna responded to one of the chemicals.

Several chemicals triggered a strong response. One of them formed part of a certain honeybee pheromone. Usually, bees release this pheromone to warn other bees when their hive is under attack. Bees can still carry traces of this scent while flying around. Crucially, hornets have learned to home in on the pheromone while hunting down yummy bees.

So why would hornets attack orchids too? Ayasse’s team realized the flowers were releasing a chemical that mimicked the honeybee pheromone. This deceived the hornets into pouncing — and pollinating. Ayasse concludes that “deceptive” flowers use all kinds of tricks and strategies to influence and guide their pollinators.

What about human pheromones?

Scientists do have hints that we respond to scents produced by other people. For example, a newborn baby will crawl toward a cotton pad infused with the scent of his or her mother’s breast. Some research also suggests that an individual’s body odor changes after watching frightening movie clips. Indeed, women who smelled the sweat of men who had watched such clips were more likely to think that pictures of faces with neutral expressions looked fearful.

In one study, scientists also showed that the scent of another person could trigger chemical changes in the body. At the Monell Chemical Senses Center in Philadelphia, Pa., Charles J. Wysocki studies how smells affect human behavior. In one experiment, he and his colleagues collected chemical extracts from men’s underarms. Then the scientists applied small amounts of the extracts — mixed with perfume to mask any odor — to women’s upper lips.

At the same time, the researchers monitored levels in the women of a chemical called luteinizing (LU ten EYE zing) hormone. Its levels in women rise and fall in cycles; peaks signal the ovaries to release an egg. In the experiment, after sniffing the men’s underarm scent, the women began producing pulses of the hormone at a faster than normal rate. The women also said they felt more relaxed.

Wysocki isn’t sure why the men’s smell should cause such changes. But if a man’s scent relaxes a woman, perhaps social interactions might become easier, he says. And the changes in the hormone’s production might make the woman more willing to spend time with the man.

That doesn’t mean you should believe ads and websites claiming to sell pheromones that attract members of the opposite sex, warns Wysocki: “There is no good evidence to support any of that.”

Pheromones do have practical, proven uses in attracting unwanted pests. For example, some people use insect pheromones to trap or confuse bugs that eat crops or plants.

This strategy can work for bigger pests as well. An eel-like species called the sea lamprey has invaded the Great Lakes and is killing lots of prized game fish. Scientists have found that if they pump a mating pheromone into a stream, they can lure female lamprey upstream into traps, even from hundreds of meters away. Trapping the females prevents them from mating with males. Eventually this could cause the lamprey population to shrink.

Pheromones are amazing because they work in small quantities, can travel over long distances and trigger very specific changes in animals. Concludes Wyatt: For the animal kingdom, “It’s one of the most effective ways of communicating.”

attractant A chemical that lures an organism, usually by odor.

cephalopods Ocean-dwelling animals that include squid and octopuses.

hormone A chemical made by the body in tiny quantities that causes cells in other parts of the body to become more or less active.

lamprey An eel-like, water-dwelling animal with a backbone and no jaws.

pollen Powdery grains released by the male parts of flowers that can fertilize the female tissue in other flowers.

pheromone A molecule or specific mix of molecules that makes other members of the same species change their behavior or development.

evolve To change gradually over generations.

species A group of living organisms consisting of similar individuals. 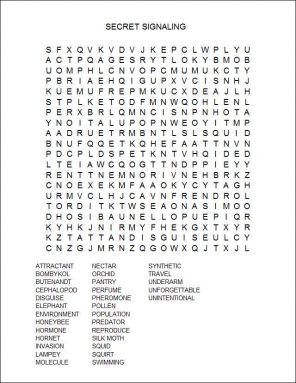