Dinosaurs died out more than 65 million years ago (not counting birds, their modern-day relatives). So, it’s a bit surprising that scientists know so much about these ancient creatures. Now, a new study reveals that a certain type of duckbilled dinosaur lived in the Arctic year-round. These animals also traveled in herds that included many age groups, they find. The creatures even appear to have gone through a “teenage growth spurt.”

Just as interesting, however, is how these insights emerged. Scientists didn’t look at a single fossil bone. Instead, they analyzed a large number of preserved footprints on a mountainside located toward the southern end of central Alaska.

Anthony Fiorillo works at the Perot Museum of Nature and Science in Dallas, Texas. As a vertebrate paleontologist, he studies the fossils of creatures with backbones. In 2007, he was part of a research team exploring Denali National Park. “We rounded the corner and there they were,” he recalls. Thousands of footprints had been preserved in stone. “It was amazing.”

Those tracks pepper a steep patch of exposed rock about twice as long as a football field and up to 60 meters (roughly 200 feet) wide. They sit at least 160 kilometers (100 miles) north of the Gulf of Alaska. Between 69 million and 72 million years ago, that now-rocky material was muddy sediment on a floodplain near a seacoast, Fiorillo explains. The hadrosaurs walked across the squishy mud. Later, the footprints they left turned to stone.

Previous studies suggested adult duckbills took care of their young, says Fiorillo. The new evidence that these dinosaurs truly traveled in herds with multiple age groups confirms that parents cared for their young well beyond the time they left the nest, his team concludes. The researchers published their findings June 30 in Geology.

Evidence for herds of dinos

Small meat-eating dinosaurs called theropods had left behind a few of the tracks that Fiorillo’s team found in Denali. Birds had left some others. But the vast majority came from creatures called hadrosaurs. These large plant-eating duckbilled dinosaurs had been quite common during the Cretaceous Period. That helps explain one of their nicknames: “cattle of the Cretaceous.”

For the new study, the researchers focused only on the hadrosaur tracks. More than half of the footprints were preserved so well that they had clear impressions of the skin on the dinosaurs’ feet.

Most tracks had a similar level of preservation. That suggests all were probably left within a short period. Other fossils in the nearby rocks, including insect burrows, suggest these hadrosaurs had left their footprints during the summer. These are trace fossils — evidence of ancient life other than a preserved carcass or bone.

At the time these dinosaurs lived, Fiorillio says, the average temperature in the warmest months was between 10° and 12° Celsius (50° and 54° Fahrenheit). That’s about what conditions are like today along the border between Canada and the lower 48 U.S. states, he notes.

The team measured a large sample of the duckbills’ footprints. They fell into four distinct size ranges. The largest tracks, presumably made by adults, measured about 64 centimeters (25 inches) across. The smallest tracks, 8 centimeters (3 inches) wide, were likely left by young duckbills. They would have been no more than a year old. Tracks of two other size groups were probably made by juveniles and near-adults.

About 84 percent of the tracks sampled for the new study had been left by older hadrosaurs — adults or near-adults. Roughly 13 percent came from the youngest members of the herd. And a mere 3 percent came from herd members considered to be juveniles, says Fiorillo. The rarity of tracks by these tweens suggests that the young of this species had a rapid growth spurt. If true, they would have spent relatively little time at this vulnerable size — and therefore left very few tracks.

“What’s really neat is how many small tracks there are,” notes Anthony Martin. An ichnologist — or expert in trace fossils — he works at Emory University in Atlanta, Ga.

Other scientists had analyzed fossil bones from duckbills. These studies had hinted that the equivalent of adolescent hadrosaurs would have experienced growth spurts. But the new findings are “the best evidence that I’ve seen,” says Eric Snively. He’s a vertebrate paleontologist at the University of Wisconsin-La Crosse. “This is a great study,” he adds, “and further evidence that juvenile hadrosaurs grew up in an eye-blink.”

Also previously, researchers had proposed that Arctic dinosaurs migrated farther south for the winter. That’s because even if the region was much warmer than it is today, nights in the high Arctic would have been 24 hours long. So, with no sunshine for several months, Alaska would have had long periods of very bleak, chilly weather.

But finding juveniles in the herd strongly suggests that these dinosaurs remained in the Arctic all year. That’s because adolescents and preadolescents wouldn’t have had the strength or stamina to make those long treks, Fiorillo maintains.

The presence of very young dinosaurs might have been expected, he notes: If this were a nesting region, the babies would have hatched sometime just before summer. And remember, that’s when these tracks were left. But that wouldn’t explain the juveniles, he says.

The team’s findings “suggest that these dinosaurs were overwintering in Alaska somehow,” says Snively. At the time, the average temperature in the region remained above freezing even during the winter, he notes. But, he adds, “this study raises interesting issues about how the dinosaurs could live in the region when it was pretty dark for several months at a time.”

dinosaur  A term that means terrible lizard. These ancient reptiles lived from about 250 million years ago to roughly 65 million years ago. All descended from egg-laying reptiles known as archosaurs. Their descendants eventually split into two lines. They are distinguished by their hips. The lizard-hipped line became saurichians, such as two-footed theropods like T. rex and the lumbering four-footed Apatosaurus (once known as brontosaurus). A second line of so-called bird-hipped, or ornithischian dinosaurs, led to a widely differing group of animals that included the stegosaurs and duckbilled dinosaurs.

floodplain   The nearly flat land that runs along the side of a river, for some distance out from the water. When the river floods, it spills over into this plain, which is built up, over time, with the silt left as the waters recede. That silt tends to be soil that eroded off of the upstream lands during rains.

fossil  Any preserved remains or traces of ancient life. There are many different types of fossils: The bones and other body parts of dinosaurs are called “body fossils.” Things like footprints are called “trace fossils.” Even specimens of dinosaur poop are fossils.

geology  The study of Earth’s physical structure and substance, its history and the processes that act on it. People who work in this field are known as geologists. Planetary geology is the science of studying the same things about other planets.

hadrosaur    A duck-billed, plant-eating dinosaur that lived during the late Cretaceous Period.

ichnologist    A scientist who studies trace fossils such as footprints, burrows or chew marks on bones.

paleontologist  A scientist who specializes in studying fossils, the remains of ancient organisms.

theropod  A meat-eating dinosaur of a group whose members are typically bipedal (walk on two legs) and range from small and delicately built to very large.

trace fossil    Evidence other than a preserved carcass or bones of ancient life. Footprints, burrows or chew marks on a bone are examples of such trace fossils. These can provide information that’s more valuable than body fossils. For instance, trace fossils can hint at a creature’s behavior. Evidence of that is usually scant.

tracks and trackways    Impressions, usually footprints, left behind by an animal. The spacing and arrangement of individual footprints can provide clues about a number of things, including how large a creature had been and how fast it had been moving.

vertebrate  The group of animals with a brain, two eyes, and a stiff nerve cord or backbone running down the back. This group includes all fish, amphibians, reptiles, birds, and mammals. 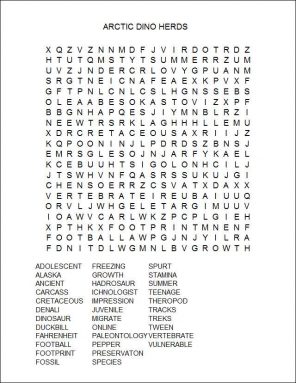