Flash back 540 million years. It’s the dawn of a new era, and something very, very big is about to happen to life on Earth. Over the next 10 million years — a blink of an eye in our planet’s long history — dozens of new forms of animals will suddenly emerge in the oceans.

This burst of life marked the start of a period in Earth’s history called the Cambrian. It was so dramatic and so fast that scientists call it the Cambrian Explosion.

“The Cambrian Explosion was the biggest diversification in animals in the history of life,” says David Harper. This paleontologist works at Durham University in England.

Before the Cambrian, Harper says, marine animals had been divided among just a handful of groups, or phyla (FY-luh). Life forms had been relatively simple, such as bacteria and some worms. Now, the oceans suddenly teemed with creatures. Some had hard shells. Others had nerve chords. Many could wiggle, burrow or swim. They had developed different organs for different functions, including eyes.

Ninety percent of the animal phyla that exist today appeared in that short window of time. The animals in each phylum generally share a similar body type or plan. One of the new groups was the chordates — animals with backbones. That group today includes all fish, reptiles, birds, amphibians and mammals. Another was the arthropods, which now includes insects, arachnids (A-RAK-nidz) and crustaceans (Krus-TAY-shuns). Animals with radial symmetry, such as the ancestors of starfish and sea urchins, also emerged at this time. These animals are known as echinoderms (Ee-KI-no-derms).

Never again have so many new types of animals emerged in such a short period of time. (Although since then several mass extinctions have wiped out nearly as many species just as quickly.)

No one really knows what actually triggered this burst of life, which was unique in our planet’s history. But recently, studies have turned up new clues to how changes in the geology, chemistry and atmosphere of Earth influenced the Cambrian Explosion — and how this rapid growth in the diversity of life, in turn, affected the planet.

An amazing glimpse into the Cambrian Explosion comes from a rock formation found in the Canadian Rockies of British Columbia. This Burgess Shale preserves countless fossils of Cambrian creatures. The organisms became fossilized after they were trapped in muddy marine sediments that later turned to stone. The fossils record fine details of these creatures. And not just of hard body parts such as bones and shells, but also of muscles, guts and other soft parts.

Some Burgess Shale creatures seem a little familiar. Others are just plain strange. Take Opabinia, for example. This thumb-sized creature had five mushroom-shaped eyes and a miniature trunk like an elephant’s, with a handy gripper at its end. Opabinia kept odd company, too. One critter from its period, for instance, was almost all legs and spikes — like a walking, armored slug. It was so weird that biologists have named it Hallucigenia — as if only a hallucination could explain such a creature.

The Burgess fossils reveal a fascinating world. Yet the Cambrian Explosion was far more than just a lot of bizarre new animals. “The big thing about the Cambrian Explosion is that it was the first animal-based community,” Harper told Science News for Students. “Before that, animals were there, but they weren’t very diverse or common.”

Oxygen on the rise

Earlier, during a very long stretch of time known as the Precambrian, life was simple. Bacteria dominated, quietly clumping into slimy mats. Then, starting around 3.5 billion years ago, some of those bacteria began producing oxygen as a byproduct of photosynthesis. Until then, there had been little or no oxygen, which complex animals need.

Around 2.3 billion years ago, oxygen levels in the atmosphere and oceans suddenly rose. Iron began to react with that oxygen in a process called oxidation. You might think of it as rusting. The rusting that accompanied that spike in the air’s oxygen levels is permanently recorded in rock layers. These include some that are called banded iron formations.

What happened to oxygen levels over the next 1.8 billion years, leading up to the Cambrian Explosion, isn’t clear. Scientists want to know: Did oxygen levels rise gradually over this period? Or did oxygen levels skyrocket, providing a quick trigger for life’s great blossoming?

Imagine being able to test drops of actual Precambrian seawater to find out just how much oxygen the oceans contained at a given moment in the distant past. That’s what Natalie Spear has done. Last year, this geologist and her team at Pennsylvania State University in State College discovered ancient seawater droplets in Australia. They were trapped in 830 million-year-old salt crystals. When saltwater evaporates, it leaves behind this mineral, called halite.

“The seawater was trapped as the salt crystals grew,” Spear explains. Finding these crystals was “pretty remarkable,” she adds. “It’s difficult to find salt that old that is well-preserved.” The halite samples contained seawater nearly 300 million years older than any ever analyzed!

Liquid trapped inside a crystal is called a fluid inclusion. “Fluid inclusions are little time capsules,” explains Linda Kah. A geologist at the University of Tennessee, in Knoxville, she studies rocks from the Precambrian to determine the chemical conditions that existed when they formed.

That may sound odd. But it works because oxygen in the air weathers, or erodes, rocks on land that contain iron and sulfur. “Even a little oxygen in the atmosphere will weather rocks,” says Kah.

Rain then washes the eroded bits of rusted rock into the ocean, sulfur and all. There, oxygen reacts with sulfur to form sulfate. The more oxygen there is to weather rocks, the more sulfate that ends up in the ocean.

Spear’s team found sulfate levels 830 million years ago were just 10 percent as high as they are today. That level would be consistent with an atmosphere containing about 2 percent oxygen. For comparison, oxygen today comprises about 21 percent of the air.

Scientific studies of other seawater inclusions offer clues to sulfate levels — and oxygen — at points in time even closer to the Cambrian. They show that by the end of the Precambrian, about 540 million years ago, ocean sulfate levels had risen to between 50 percent and 80 percent of today’s levels. Oxygen levels would have risen by a similar amount, says Spear at Penn State. Her team described its new findings in the February 2014 Geology.

Another recent study also showed that low oxygen levels played a role in delaying the great diversification of life. This study measured the rise of oxygen by analyzing trace metals in layers of ancient rock. An international team of researchers, led by Noah Planavsky of Yale University in New Haven, Conn., published its findings in the October 31, 2014, issue of Science.

Together, these studies provide snapshots of how much richer in oxygen the world’s oceans grew in the buildup to the Cambrian Explosion.

The steady increase in oxygen levels over hundreds of millions of years certainly could have set the stage for the upcoming explosion in animal life.

Yet oxygen wasn’t the only thing that changed during the last 300 million years of the Precambrian. Major ice ages  came and went. Along with cold weather, these ice ages made sea levels yo-yo up and down. Also, Earth’s great tectonic plates  were on the move. They changed the size and position of the continents — and in turn the circulation patterns in the oceans and atmosphere. All of these changes to Earth would have affected the life upon it.

The simpler life forms that had emerged before the Cambrian Explosion helped set the stage too, says Don Canfield. He’s a geologist at the University of Southern Denmark, in Odense. There, Canfield studies the chemistry of ancient oceans.

Marine animals, such as worms, already were burrowing under the oceans, for example — 10 million years before the Cambrian began, he notes. And that churning likely changed the chemistry of the sediments blanketing the shallow seafloor, he told Science News for Students. Crucially, the action of the worms mixed in more oxygen, making the sediment even better habitat for animals.

Harper, the Durham University paleontologist, has considered all of the factors that may have contributed to the Cambrian Explosion. He’s read about what others have found — Precambrian fossils, new estimates of ancient oxygen levels, shifting continents and evolving climates. He’s also probed rocks and fossils for clues.

Last year, working with M. Paul Smith at England’s Oxford University, Harper reached a conclusion about the cause of the Cambrian Explosion: “It was a cascade of events, not one thing.” Life, he adds, got a lucky break as a series of changes built up. Harper and Smith published their assessment in the September 20, 2013, Science.

Harper calls these changes “feedback loops.” What he means is that as one condition changed, another changed in response. And this caused the first condition to change some more. The process sped up adaptation and change.

Harper says predator-prey relations are a great example. As predators evolve, their prey must evolve too if it hopes to avoid being eaten. Prey may develop thicker shells or start burrowing. “Then,” he says, ”the predators respond by changing too.” The results ripple throughout the ecosystem, Harper says. For example, Hallucigenia most likely developed those nasty spines to discourage predators.

Rising seas also eroded more shoreline, says Harper. That, in turn, washed more minerals into the oceans. The elements in them included, of course, sulfur but also phosphorus and calcium. In fact, calcium levels in seawater tripled during the early Cambrian.

“Calcium is what builds shells,” Harper explains. Over time, animals in the seas developed thicker, more ornate shells. He says that’s one thing that “becomes very, very obvious during the Cambrian Explosion.”

Such feedbacks would have exaggerated the pace of change. They also likely would have led animal diversity to rapidly increase, Harper suspects.

The work by Harper and Smith shows us how closely Earth’s geology and biology are linked. Tweak one, and you alter the other. In the strangeness of the Cambrian, 540 million years ago, the results were as big as life itself. 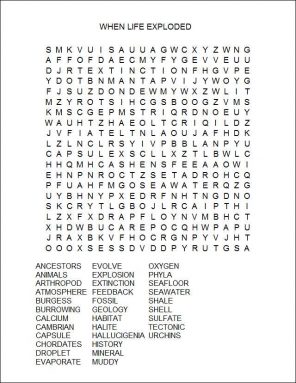